Israel has put on display the Iranian C-704 "Nasr" missiles found aboard the cargo ship Vistoria, in Ashdod.

Had these missiles been successfully delivered and deployed, they might have had an impact on the ongoing siege of Gaza. But they were not delivered and surprise has been lost, so the siege continues.

In the mid term, Gazans' best chance of relief appears to rest on an upcoming Egyptian government becoming truly representative, with a foreign policy reflective of Egyptian popular sentiment. It's a big "if" but if attained, the siege may finally be lifted. 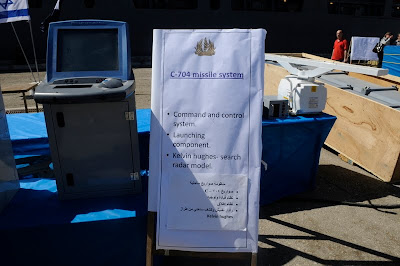 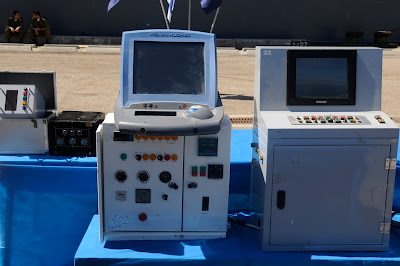 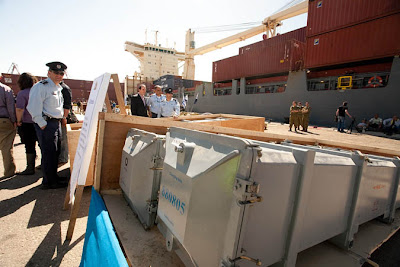 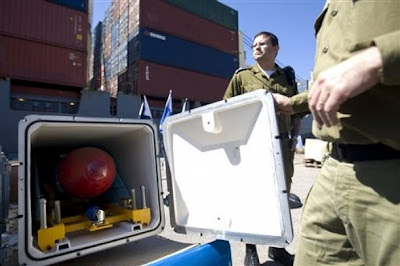 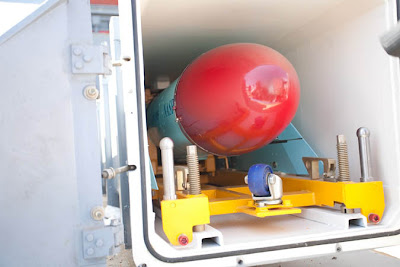 Mr. Uskowi, what's your take on the siege on Gaza?

BBC Persian's reporter was present and reported Chinese writings were clearly visible on the armament; and when asked, IDF representatives only based their claims on "past behavior" of Iran!

The siege of Gaza is illegal and politically counterproductive and needs to be lifted immediately.

This post is about with Iran's sending sophisticated armaments to Gaza. Anon 3:58 PM is telling us that BBC has reported Chinese writings on the missiles. I don't know what that means, and probably Mark can shed light on it. If however the shipment originated from Iran, we should denounce it as well. The Iranian government should be part of the solution not the problem in Gaza.

One other factor to consider: more arms like these missiles sent to Hamas is not necessarily used against Israel, and as likely against the West Bank in a civil war. No country needs to add to the military capabilities of the sides in such conflict. Again the solution is political and not military.

It is interesting that the Islamic Republic always accuses the West of trying to use arms against Iran and militarize its relationships with the country. Isn't that what Iran is doing in Gaza?

I love your blog and most of your postings and comments, but here I am afraid you are repeating pure US Israeli propaganda.

You say that the "solution is and should be political". Tell me, did the Lebanese achieve a "political" solution to the occupation of their territory by Israel? And what do you do when one side, namely the Israelis, simply does not want a political solution and much prefers the status quo?

You also say that "Palestinians should recognize the rights of Israelis to have their own state". It is my understanding that both Fatah and Hamas have recognized this, formally. Furthermore, can you please tell us what "state" should we recognize? Does this state have recognized borders - the absolute minimum territorial requirement for defining a country? It does not.

I suggest you spend just two weeks in Gaza, and to be fair and balanced, two weeks in Tel Aviv. Then come back and tell us what you think should be done.

In other words, Palestinians in Gaza don't have the right to defend themselves!
That's effectively what you are saying by saying that no arms should be sent to them.

I am looking at the issue not from legal point of view, but political. In my view, the best solution to Palestinian-Israeli conflict is not war but negotiated settlement. And having the right of self defense does not preclude any people to pursue non-military routes to resolve their conflicts with others. Of course for Hamas this might be too much to ask. Even against other Palestinians, they prefer to use force to settle disputes.

Mr. Uskowi, in a perfect world, yes, your idea will be great but unfortunately it's not..The legal settlement you're talking about has been going on for the past 60 years with nothing to show for the Palestinians..

Even worse, the country that's supposed to be an "honest broker" in the whole issue always ends up always backing one side against the other..A clear example is the recent veto vote at the UN..

What's the point in a legal settlement if the judge is always in the pocket of your opponent?

Also by your logic, should the US + EU etc also prevent any weapons they send to Israel, knowing very well that those weapons are used on DEFENSELESS Palestinians?

The world is not flat..In an ideal world, your logic will be correct but this is not the case. Here you have the "west" pretending to support a peaceful resolution to the conflict while heavily arming one side of the conflict to inflict more pain in order to subdue the other..If this weapons shipment is indeed from Iran, which i highly doubt (more likely a false flag ops), I'll be happy if Iran sends even more sophisticated weapons to help the Palestinians achieve a balance so they can also negotiate from a position of strength - and I'm not even Palestinian. You may not agree with me, but that's the real world for ya..

Actually, it is a confiscated set by the Lebanon army in cooperation with some UN forces some time ago.

Delivered by the Hariri loyalists to Israelis to help put pressure on Iran.

A new Egyptian government could open up its border with Gaza, and allow Gazans who need hospital treatment to go to Egyptian hospitals instead of Israeli hospitals. They could also supply electricity to Gaza.

giving the israel and advantage... they will study the missile and in few months will come out wirh affective counter measure against threat fromiranian missile system

Fatah is using violence against other Palestinians and not (only) Hamas.

Israel is getting much more powerful weapons from whole of the world. Why shouldnt the Palestinians get some sophisticated weapons? Isnt it their right to protect themselfs through deterrence like is doing it since its illegal creation?

Dont be so unrealistic Mr. Uskowi, your attitude is working just in a perfect world. I havent read any articles of you concerning new weapons delivered to the Zionist entity by the US to attack Iran.

We dont know for sure that those missiles are send from Iran, and not just a fabricated story from Israel.
Why are you so sure abput it?

its confirmed, The Lebanese army found the empty cach of these missiles after the 2006 conflict.
Israelis got hold of them and duplicated some dummies (from Iranian parades) and staged this masquarade.

Mr. Nader you should not broadcast propaganda against Iran . Every one with a little sense can understand that Iran will not send arms to gaza in a ship because everyone saw what Israhellis did in Turkish flotilla . They attacked a humanitarian ship and people would believe that Iran would be so foolish to send a ship with arms ? Are you crazy Mr.Nader . You believe in this Israhelli propaganda ? Why didn't you post the news that a Israeli originated US man disguised as reporter was caught red-handed in Turkey while he was giving PKK Jihadi to arrange some suicide bombing so that Turkey's attention turns to the Jihadi problem rather than Flotilla massacre?