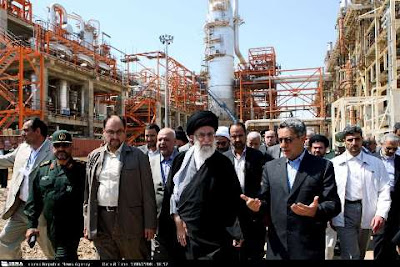 Iran’s Supreme Leader Ayatollah Ali Khamenei today visited the country’s South Pars facilities in the Persian Gulf port of Asalouyeh. The South Pars together with North Dome field on the Qatari side of the Gulf constitute the largest natural gas field in the world. Asalouyeh is the closest land point to the field, which contains half of all Iran’s natural gas reserves.

Over the years Iran has built various plants and refineries in Asalouyeh. The original development plans had envisioned the completion of 27 phases, with some 28 refineries and 25 petrochemical complexes plus other light and heavy industrial plants. Out of these, 10 refineries and 7 petrochemical plans have been completed. Khamenei today visited Phase 15, which is the latest phase under construction.

In the past year, because of the US and EU sanctions, the Western companies have left Asalouyeh. Their technical expertise and investments was key to the completion of the remaining phases of the development and the overall operation of the existing phases. Iran’s IRGC has set up various business companies to replace the international oil and gas giants and Iran has signed an agreement with the Chinese for additional support, but it is highly unlikely that IRGC and the Chinese companies would be able to provide the level of technology required for such complex projects. The most likely outcome would be the work on the simplest projects and shelving the future phases for now.

Meanwhile, Qatar has established the most extensive and modern liquid natural gas (LNG) plants in the world to exploit the gas field from its side across the Persian Gulf. That country’s natural gas exports are now all in the form of LNG, making Qatar the world’s largest supplier of the sought-after liquid gas.

Honestly, I preferred the Shah. Now I know everyone is going to yell at me right now and call me every name in the book, but the economy (whether you like it or not) was better under the Shah. If only Mossadeq would of done what the Shah did, Iran would not be in the mess it is in now. Mossadeq the moron nationalized the oil, but the Shah did something much smarter, the Shah quadrupled the price of crude ;)

"Of course [the world price of oil] is going to rise," the Shah told The New York Times in 1973. "Certainly! And how...; You [Western nations] increased the price of wheat you sell us by 300%, and the same for sugar and cement...; You buy our crude oil and sell it back to us, refined as petrochemicals, at a hundred times the price you've paid to us...; It's only fair that, from now on, you should pay more for oil. Let's say ten times more."

"Highly unlikly anynoe progresses without the west, is the very reason the likes of Pahlavi were thrown out.

Iran can and should.

This typical way of thinking is beneath an Iranian.

He says some things along those lines in this video which I think might be of some interest;

Interesting how he states the western economies will 'blow up', sounds very similar to the manner in which the worldwide recession started in 2008!