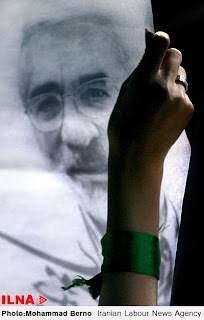 Mir Hossien Mousavi today accused Iran’s supreme leader Ayatollah Ali Khamenei of not acting in the interest of the country. He declared that during the past week, the country has suffered a dramatic change for worse. Mousavi vowed to pursue his request to have the election annulled.

“I am not only prepared to respond to all these allegations but am ready to show how election fraudsters joined those who are truly behind the recent riots and shed the blood of people,” Mousavi said [LA Times, 25 June].

Mousavi has surprised many Iran analysts by the strength of character he has shown since he was thrown into the leadership position of the on-going mass movement in the country. Today’s remarks will cement his position as the undisputed leader of the movement.

Yesterday, Khamenei had said no to annulment of the election.
Posted by Nader Uskowi at 5:28 PM

If you are participating in the Iranian Riots or know someone who is and wish to remain safe? Let me help by showing you how to distinguish between those who are angry and those who are lethal. http://www.aggressionmanagement.com/Riots-in-Iran.htm

The lack of solid information available to us outside of Iran about the election is very bothersome.

For example, exactly how is it that the harsh insider Mousavi has suddenly become either "moderate" or "leader of the resistance?" Talk about transformations!

For another example,what is the real story about Rezaei, the ultimate national security insider's insider even running in the first place and then protesting and then...suddenly shutting up?

There are two elements at work here. The first one is a genuine social movement, mainly by the youths. They have no hope in future, considering the double digit unemployment and any hope for change. They are also fed up by social and political control. Then you have a most severe power struggle among the political elite, unseen in 30 years of Islamic Republic.

Mousavi did not volunteer to head the social movement; so happens that he was “chosen” or accepted by the movement to lead it, albeit his inexperience for such critical “appointment.”

Has Mousavi changed radically, and for better, in the past 20 years? I certainly hope so. But that's not the critical question. The current movement in Iran was looking for a leader, and so far it has found it in Mousavi, for lack of any other recognizable leader.

Hello Iranian people:So your government has gone a stray from the countries chosen religion Islam/Koran and have went down the wrong path.Your government is out of control and needs to be replaced.Your government seems to want to go to war with some one,looking for a fight.Your government isnt following your countries constitution.Your so called supreme leader and president is not acting in a mannor of a holy peaceful country but of a violent, terrorist group supporting,hostile government.Your so called elected governmental officals looks to have become nothing more than a dictator and his regime.Oppressing and lieing to the Iranain people.Irans government should be a holy, godly, peaceful, government the supreme leader should be a holy man a spiritual leader for peace not violence,representing the Iranian people but they are not are they.Why does the Iranian people put up with it.Election votes are not even counted truthfully. Its a rigged election phoney elections.Why even bother to vote.If the Iranain people cant make changes to there government by voteing them out of office then they will need to use force and force them out.Some Iranains side with the current wicked governmental ditcator and his regime that have gone a stray.Then there are the other Iranains that want to make a change in there governmental leadership.Like a new supreme leader and president that will follow there constitution and stop there violent wicked ways.Some are willing to fight for there freedom from the current government and some are not, and some just put up with it just they way it is and live with it as is..I hear it said that Mousavi has suddenly become either moderate or leader of the resistance.What is the resistance willing to do? How far are they willing to go to make the changes needed? A unarmed resistance that goes up against a armed regime is not going to prevail in the fight useing words and sticks and stones and the media but will need guns weapons to use to fight with to have a chance of winning the battle, civil war for the resistance.If the people of a country are willing to fight for there freedom in there homeland against a corrupt government that has taken control, then that people has a chance to obtain freedom a victory ,tomake the change but if they are not willing and able to go up against the corrupt government and its military armed with weapons with a good chance of winning the battle then what good would it do to even protest in the first place and shed any blood in vain at all.In being unarmed and trying to have a peaceful protest against the current wicked government isnt going to make any changes it will just get the protestors killed or imprisoned, and being unarmed and letting them beat you and shed your blood for the world to see thinking they might come and help and remove the wicked govermental officals for them like what happened in Iraq, isnt going to happen, your only letting the world know what it already knows about the Iranian government.That they are ungodly unholy, Cruel,violent,hostile, and cant be trusted,are unstable,and supports terrorist groups and wants a nuclear bomb and doesnt care about there own religion or its own people.So what is the Iranain people going to do about there government?Will they rise up to the challenge and take up arms arm them selves with weapons and have a civil war and fight the fight for freedom from there current wicked dictator and his regime and remove them from power or not?Show the world that you are willing to try arm your selves and fight for your freedom a civil war tothe end and then perhaps you will get some assistance from the UN to help win it.If you dont try there will be no one to do it for you.Either stand up and accept the challenge or go home and be quiet and stay oppressed.The choice is yours.Do it for the future of the Iranian people,your grand and great grand children.Will thank you.for at least trying.If you dont make the change it wont happen.Its up to the Iranain people.
"We the Iranain people"
Do it for freedom!