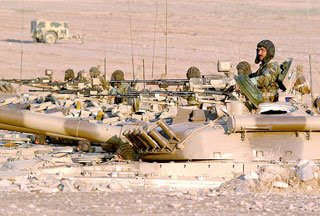 Press TV Photo
The Iranian army today conducted large-scale maneuvers in the provinces of Khuzestan, Ilam and Lorestan in west and southwest of the country. The three-day military drill will end on Wednesday.

The purpose of the exercise is for the Army to drill its command and control readiness at regiment level. The Army will test telecommunications, engineering, information processing and electronic war systems. Different war tactics and methods for future combats with several scenarios will also be exercised.

The air drill was focused on to developing the skill of the Air Force personnel in loading planes. Iran's F-4 and F-5 fighter jets and the home-made "Saeqeh" (Thunderbolt) took part in the maneuver.
Posted by Nader Uskowi at 11:54 AM