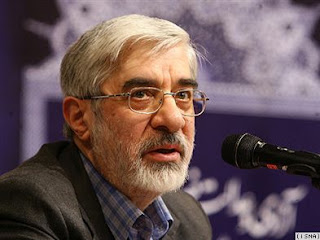 The following is an abridged version of Iranian presidential candidate Mir Hossein Mousavi's national address broadcast by IRIB channel 4 today [Press TV, 4 June 2009].
Freedom of Information
"It is in the interest of the nation to have free access to all sorts of information."
"Accessing government information is very difficult. I teach at university. There are instance at the universities where students cannot even get access to non-confidential information. I sometimes had to send letters to authorities in this regard but received no replies."
"We should move towards a state in which the government is bound to provide the citizens with any information -- Military and security information should be the only exceptions."
"The country's development is not possible without the freedom of the media and the press."
"The only limits for the media should be those clearly stated in the Constitution."
Iran's Nuclear Program

"Regarding Iran's nuclear program, the country has a 'general policy'. With respect to that policy, all the achievements, approaches and progress that have been made should not be abandoned."
"There are two issues regarding our nuclear program: the first is the use of nuclear technology for peaceful purposes, which is in our national interests and thus cannot be abandoned. The second issue is what some countries say about possible diversions in our nuclear program. This is what we are ready to discuss with other countries. "
Relations with the United States
"Before the Obama administration, an imminent attack on Iran was the headline of all American newspapers. However, it should be stressed that the US refrained from attacking Iran because of its fear of our nation and its resistance."
"The US has changed its tone. Starting relations with the US is not a taboo, should they practically change their stance."
"Iran is not a friend of the US, but America is an influential country in the world with great economic and military capabilities. It is right that we are a powerful nation, but our power should not lead us to act unreasonably. We can not face the US alone. "
Economy
"We should create an economic revolution to fight inflation. The private sector is a vital part of our plans to revive the country's economy."
"The oil industry should improve. Right now our economy is solely restricted to oil exports without realizing that the oil industry is dependent on other economic sectors. "
"Stable economic policies will help Iran to attract foreign investment. Constant changes in managerial level in the country's financial bodies -- such as the central bank -- will definitely harm the economy."
Posted by Nader Uskowi at 5:22 PM

if mousavi comes the same apologetic foreign policy of khataami will take action!