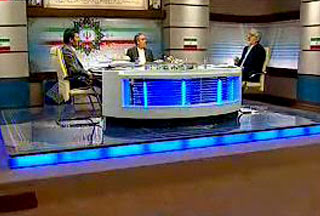 Ahmadinejad accused Khatami and Rafsanjani of masterminding a plot to oust him from of power. He specifically accused Rafsanjani of sending a message to one of the kings of the neighboring countries, understood to be the Saudi monarch, in which he had told the king not to worry about Ahmadinejad, because “his term is over in 6 months.” Ahmadinejad did not produce any proof for his accusation.

Mousavi criticized Ahmadinejad for attacking the former presidents who were not even present in the debate. Mousavi observed that Ahmadinejad was using the tactic to shift the focus of the debate away from Mousavi’s criticism of Ahmadinejad administration’s policies.

In the sharpest attack against Ahmadinejad, Mousavi said he prefered the country to be managed not based on adventurism, instability, theatrics, superstition, secrecy, egotism, extremism and lack of regard to laws, but instead he preferred a management style based on calmness and sobriety, realism, transparency, cooperation and moderation.

On foreign policy, Mousavi mocked Ahmadinejad of hallucinating that his administration was controlling the world and accused him of sloganeering instead of managing the country’s foreign policy. Mousavi gave the example of the arrest of British marines off the Iranian coast two years ago, in which the administration elevated international tension over the incident by announcing that the British will be tried and executed.

The debate got nasty as Ahmadinejad accused Mousavi’s wife, Zahra Rahnavard, of going to school to obtain two masters degrees while serving in the government and entering a PhD program without passing the required entrance exams. Mousavi called Ahmadinejad’s personal attack on his wife an “immoral” move.
Posted by Nader Uskowi at 12:59 PM

Makes you optimistic about the political future of Iran specially the "tollerance" of critic by the supporters of each.

That is a sign of riping of a society, in case of Iran, despite the enormous pressures from the
outside,a great leap forward.

I am truely positively surprised