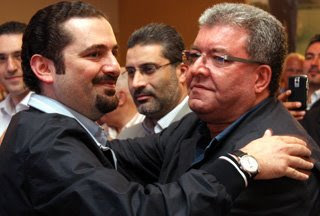 Lebanon's pro-Western coalition declared victory early Monday, fending off a serious challenge by the Shiite militant group Hezbollah and its allies to grab the majority in parliament.

"I present this victory to Lebanon," Prime Minister Fuad Saniora said on television after stations projected his pro-Western coalition was winning. "It is an exceptional day for democracy in Lebanon." [AP]
Posted by Nader Uskowi at 8:29 PM

It is amazing that one expected the Hezbollah coalition to win in the first place. (with their 11 seats in parliment)

It was probably an attempt to artificially generate a victory for the Harriri people with a bang.

Hezbollah is better off always to stay in the oppostition with a "Veto" power in the cabinet.