A Government of Lies and Repression - Mousavi 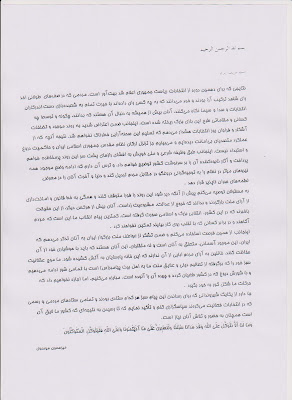 Presidential candidate and former premier Mir Hossein Mousavi has accused the government of “massive fraud” in tallying the votes. He has vowed not to surrender.

“The people know for whom they cast their ballots… and they now want to know how the [changing of votes] was planned and which officials ordered and carried it,” Mousavi said in a letter circulating in Iran.

“I strongly protest the current process [of election] and obvious and numerous violations and irregularities on the Election Day and will not surrender in the face of the dangerous game [played by those officials involved].

“What the untrustworthy officials have done would shake the pillars of the sacred Islamic Republic of Iran and would result in a government of lies and repression.”
Posted by Nader Uskowi at 8:16 AM

Any proof hombre? Me thinks you and many of your kind are sore losers! Same crap in Venezuela, Cuba, Bolivia etc. The people decided unless