Sunday is the seventh day anniversary of the bloodshed on the streets of Tehran which left Neda Soltan and other protestors dead.

A memorial service for the fallen had been announced via Twitter and other social networks for 6:00 pm on Sunday local time at Tehran’s Qoba Mosque. Observers were concerned of a heavy-handed response by the security forces and another day of bloodshed.

The reports indicate that Mir Hossein Mousavi and Ayatollah Karrubi will attend the service.
UPDATE (700 pm Tehran time): the memorial service started at 6:00 pm. Social networks report huge crowds in and outside the mosque. No reports of clashes with security forces. 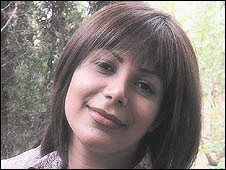 Millions across the world viewed the last moments of Neda Soltan in Amirabad at the age of 26. The killing of Neda and the bloodshed on the streets of Tehran brought anger and disgust at the Iranian government inside Iran and across the world. Neda is becoming a symbol of Iranian nation’s aspirations for freedom and progress.
Posted by Nader Uskowi at 8:41 AM

How come this Dr Hejazi (who gave an interview) left Neda as soon as filming was over. (according to witnesses)I don't think the general medical council of Britain where he lives is amused.