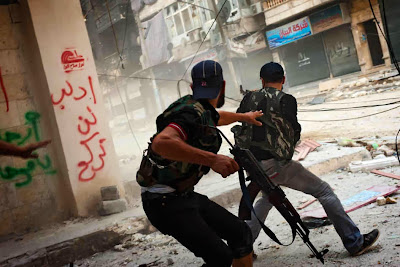 We’ve heard about the suicide bombing in front of the Iranian embassy in Beirut. Apparently al-Qaeda wanted to hit the Iranians in their real command and control post for the war in Syria. Ironically, The Hill had reported a day earlier that Free Syrian Army (FSA) and Islamic State of Iraq and al-Shams (ISIS), a teaming of all Qaeda’s Iraqi cell and affiliated Syrian militant groups, agreed to come together to battle the growing Iranian presence in Syria.

Iran denies its involvement in the Syrian conflict. Its poor foreign minister, the always laughing Javad Zarif, had to lie last week that his country is not involved militarily in the Syrian civil war. Yet every week there are coffins of Quds Force officers and personnel that are transported to Iran and funeral processions are seen and reported across the country.

The Hill, citing a pro-FSA group, estimates that Quds Force has some 1,000 personnel in Syria. The estimate could be very close to the real numbers on the ground, which would mean the Quds Force has officers leading the operations of the Lebanese Hezbollah and Iraqi Shia militias in Syria, estimated by the pro-FSA group at more than 4,000, and have enough officers to lead Syrian Army units in their fight to preserve the Assad regime. And by the way that’s the reason that whenever there is a report of Iranian casualty, it is invariably a senior officer of the Quds Force, the ones who are leading the fight.

Why comparison to Northern Ireland, and its Troubles, as the headline suggests? Syrian conflict is classic sectarian war, easy to start, very difficult to end, here pitting together the Shia’s and the Sunnis, with a foreign power and its cronies, in this case Iran’s Quds Force and its Lebanese Hezbollah and the Iraqi Shia militias, against the majority Sunni population. And this is a type of a conflict that can go on for a very long time.

General Soleimani, the legendary commander of the Quds Force, affectionately referred to as “Haj Qasem”, is a very intelligent and an intellectual soldier. He has tried his best to limit his force’s involvement in actual battles inside Syria. He has let it be known how much he abhors seeing his officers’ coffins returning to Tehran. Yet, Syria is not a classic war, does Vietnam rings the bell? Battlefields shift, and ironically the asymmetrical warfare is employed against the Syrian army and Soleimani’s Quds Force, a force that was to define asymmetrical warfare against the West! How ironic!

I see the embasy blast in more conventional terms, as a form of human artillery or mining.

In the bigger picture of the Syrian conflict and its spillage into Iraqi and Lebanon, I find its use somewhat analagous to the Vergeltungswaffen campaign (V-weapons) employed by Germany in the mid-1940's. Moreover, I don't buy into the novelty of "assymetric" assessments as a current military phenomenen.

The Syrian conflict is a civil war, now involving ideoulogically allied (albeit religiously aligned) regional forces. I submit a better analogy than Northern Ireland would be the Spanish Civil War of the 1930s.

If I were compare Northern Ireland to any Middle Eastern conflict or situation it would be definitely the situation in Bahrain. The parallels are striking as well as deeply unsettling.

Beginning a fight with 1,5 Billion Sunnis does not like an intelligent or winning strategy while your own country are bankrupted by religious fanatics - sorry, the reality is the judge about your intelligence - not you yourself.

Mark, some of us are too young to remember Spanish Civil War. Northern Ireland rings the bell for precisely its sectarian character (not Spanish war). When a religious war is started, it’s hard to end it. And this is an asymmetrical war: Soleimani should know better. Sooner he’s out, better off the Quds Force and the country.

By the way, at least on my computer in this neck of the woods, the left justification has stopped working, with broken words all over. Do you have the same issue, and if yes, what can be done?

You should then write a piece on similarity of Bahrain and Northern Ireland. See I told you, if you have patience, you see Irish in everything!

Have done already my friend,

Although the scholar who I link to in that article did an amazing and highly extensive comparison of the history of the two. Given the sectarian character I think those two are the more apt comparisons than N. Ireland and Syria.

Furthermore I'd contend that if one has an understanding of the sectarian conflict in Northern Ireland one can garner a good understanding of what it happening in Bahrain and the ever direr situation that is down the road if the regressive regime there continues its crude discriminatory and blatantly sectarian policies.

The fact remains if current regime in Syria with support of Iran and it's allies do not overcome AQ affiliated groups in Syria then the Syrian outcome becomes even more of a nightmare for the rest of the region and the world.

Aneo at 1:16 PM
Small number of the "true" Zionists fanaticks don't fight the 1 billion of christians, they just ridicule them with those "christians' consent" and dillute their believes....by material and ideological means.

So Uskowi has abandoned Rouhani's positions and statements, where Uskowi claimed earlier that Rouhani is "his CHOICE", and now Uskowi calls the FM Zarif a liar ....

I have got a question for authors, what would the US do, if its embassy was bombed somewhere else??????

Iran as a future and previous world power has the right to protect itself by seeking, having and supporting its friends, because, otherwise you could see a daily boodshed on the streets of Iranian towns, like it happens in "western democracy" of present Iraq.

With continuation of my prevuious thoughts, I would like to confront your statement that "...a fight with 1.5 Billion does not (look) like an....winning strategy...."

All that Zionist "huzpah" (pretexts), with its western and arab puppets, are about prevention of an emergence of a powerful country, with superior logic and scientific as well as economical powers.
So in that matters, as well on a battlefield, arab puppets don't have any chances except to ask the Zionists and their western subrogates.....to attempt Iran's destruction

It has been earlier explained in my comments, why that Zionist camp has no chances....to conquer and control the Islamic Republic.

I wish that American inhibitants could relieve themselves from the Zionist syndrome and understand that cooperation with the Islamic Republic will bring lower oil prices and improvement of their living standarda as well as a creation of more jobs in the US, due to Iran's (Boeing and etc...) orders.

The Zionist ideology has to be replaced by an end of the aparthaid, the end of ethnic cleansing....and that the Judaism will have a right for existence, after those previous changes.

No my friend, it is the Islamic republic that is the true apartheid ethnic cleanser; it has imported an foreign Islamic cult to suppress the Iranian people and drive them out of the country - that is the Islamic apartheid; so take your Islamic nonsense and shove it up your arse

@ There is no enlightenment in the Islamic world because Islam is nothing else but terrorism, Islam has not produced anything valuable in the history (like science technology or art), it has only produced terrorism; that is why Islam is the true religion of losers, reactionaries, hatemongers,envious thugs and Zombies; by they way you can look for yourself how much Sunnis hate the shia here

Paul always hated on your articles about Iran but kind of agree on a lot more now, you have some points on the khamenei regime no longer even Islamic, he will do whatever to hold on to power, very certain of that

no articles on the khamenei here on uskowi, 95 billion which should be major story which was a thoughtful and detailed investigation by Reuters

The true apartheid is the zionist occupation where buses are racially segregated, 60 years after Montgomery and Rosa Parks.

USKOWI -your article has some holes and may be missing some screws!-

-The Shia fighters in Syria are not fighting against the citizens so as to forcibly keep Assad in power-!LOL!

Yeah but I'm willing to bet you would still rather live in Israel than some terrorist run country.
What a loser.

There is no "rather than". It is a terrorist state.

It's obvious you can't read. Where did I say "rather than" ?

True, israel is a terrorist state.

The wahabi/al qaeda/al nusra fighters are fighting against the citizens so as to forcibly install a terrorist regime in Syria.