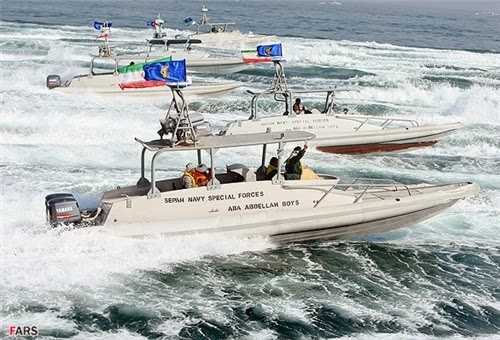 The semi-official Fars News Agency reported today that the IRGC is planning to establish a “Basij Navy.” IRGC already has its own naval force, IRGCN, responsible for defending the Persian Gulf and waging naval asymmetrical war in case of an attack on Iran. Its area of responsibility extends from Strait of Hormuz to northern Gulf.
Artesh, the regular military, also has its own regular naval force. The exact role of the new Basij Navy was not disclosed, except it was spoken of as being an auxiliary force to boost the capabilities of the IRGC Navy.
“The Basij Navy should be quickly organized through the cooperation of the IRGC Navy and the Basij Organization,” said Brig. Gen. Ali Akbar Kharatiyan, deputy commander of IRGCN. “On the basis of the same plan, some members of Basij will undergo specialized trainings in the field of naval defense and operations.” (Fars News Agency, 2 November)
Gen. Kharatiyan made his comment during a naval conference in Bandar Abbas.

What will be their main tactic...let me guess...collective high speed kollision with a target? Have a speedboat stuffed with explosives run into the opponents ship? For god's sake no...having a land version of mindless "suicide drones" ready to throw themselves in waves at enemy positions is crazy enough.

The sensible thing would be to continue the development and expansion of the regular navy.

Pray they don't come up with more of these senseless ideas in the future.

There should be only one navy and that is the national navy. The rest are just floating terrorists sanctioned by the terrorist theocracy occupying Iran.

A bunch of poor kids forcibly conscripted into this bullshit, which will turn into suicide missions if a war actually breaks out.

This force was created to expand the drug running business of the IRGC mafia. After these hapless souls have been used they will be easily disposed. Such is the destiny of those that serve evil.

These American services provide a measure of training, and provide supplemental assistance when needed.

Reminds me of the Mexican drugs cartel. They have mini subs as well as fast boats. I guess the regime will come up with suicide paragliders next.

USKOWI-
with due respect ,your rendering of the report portrays the venture in negative light!.As usual you are good in creating a STORM !.

Anonymous November 3, 2013 at 1:13 AM, exactly. The rest of the comments are just shill propaganda from the hasbara.

Anything mentioned about the equipment they'd receive? The maritime defense industry does seem to have known a pretty serious measure of advancements recently (namely: ghadir, zolfaqar, the last drone painted in a fisherprice color scheme).. Using recently manufactured equipment could lower the IRGCN running cost. stocking the older less streamlined speedboats with a tiers force insures their usability without requiring as much maintenance. If, basij sailors are used as a reserve force, that is ; personnel who has sufficient theoretical formation, and a small measure of practical/technical experience.

Iran must strengthen it's navy forces.