Kerry Will Leave for Geneva Today 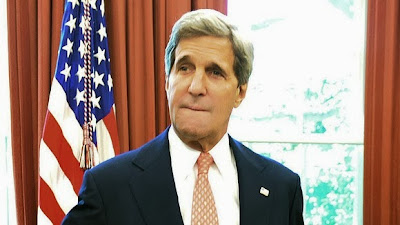 “After consulting with EU High Representative (Catherine) Ashton and the negotiating team on the ground, Secretary Kerry will travel to Geneva later today with the goal of continuing to help narrow the differences and move closer to an agreement,” State Department spokeswoman Jen Psaki said in a statement. (Reuters, 22 November)

Kerry, along with other foreign ministers of P5+1, was expected to go to Geneva if an agreement appeared to be at hand. Russia’s foreign minister, Sergey V. Lavrov, has already arrived in Geneva.

The news is a welcome development and raises hope that an accord would be signed this weekend.

May be Laurent Fabius should be spared of coming to Geneva, perhap we can share a brighter hope.

Kerry looks like a piece of rubber. He must have had cosmetic surgery.