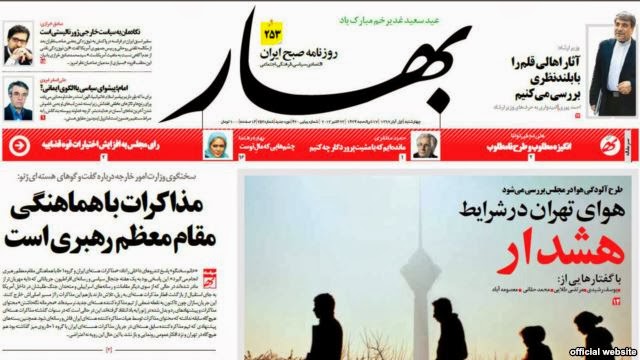 Saeed Pourazizi, editor-in-chief of Bahar daily, was arrested today in Tehran and sent to the notorious Evin prison, ISNA reported. The newspaper was shut down on Monday by government censors.

In its 23 October edition, the paper had published an op-ed piece entitled, “Imam, a Political Leader or a Religious Model?”

Motahari challenges the judgment of Khamenei about 88

These sorts of things are reflective of a nation under threat.

During a period where the United States was under threat, President Lincoln arrested newspaper reporters and editors and held them without trail, indefinitely. When the Supreme Court voiced dissent, Lincoln simply ignored the court and even deliberated arresting the chief justice.

It's my personal opinion that upon a certain time where Iran is no longer under foreign threat, symptoms of insecurity such as these will dissipate.

Ye, because you are anti-american you are entitled to every crime - it's a funny ideology for imbeciles .

again, a load of utter fanboy bullshit headed by a lame attempt at analogy.

there's no civil war raging in Iran and you remain a tirelessly dishonest lickspittle.

Mark, let's not justify the reactionary attempts by Iran Judiciary and the country's hard right to kill press freedom in the name of external threat in the 21st century. We as bloggers especially should object to this naked censorship. Reactionary regimes can use their vast information operations to defend their censorship, they don't need our help.