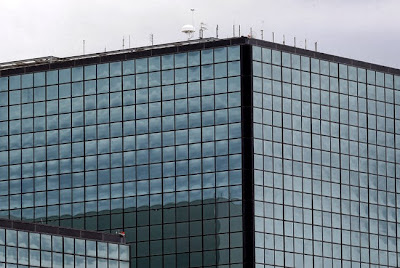 The New York Times on Sunday published new details on NSA documents obtained by Edward Snowden. The agency seems to be listening everywhere in the world! Following is an example of an NSA document on Iran’s Supreme Leader Ayatollah Ali Khamenei’s 2009 visit to Kurdistan, as reported by the Times:
“In May 2009, analysts at the agency learned that Iran’s supreme leader, Ayatollah Ali Khamenei, was to make a rare trip to Kurdistan Province in the country’s mountainous northwest. The agency immediately organized a high-tech espionage mission, part of a continuing project focused on Ayatollah Khamenei called Operation Dreadnought.
Working closely with the National Geospatial-Intelligence Agency, which handles satellite photography, as well as G.C.H.Q., the N.S.A. team studied the Iranian leader’s entourage, its vehicles and its weaponry from satellites, and intercepted air traffic messages as planes and helicopters took off and landed.
They heard Ayatollah Khamenei’s aides fretting about finding a crane to load an ambulance and fire truck onto trucks for the journey. They listened as he addressed a crowd, segregated by gender, in a soccer field.
They studied Iranian air defense radar stations and recorded the travelers’ rich communications trail, including Iranian satellite coordinates collected by an N.S.A. program called Ghosthunter. The point was not so much to catch the Iranian leader’s words, but to gather the data for blanket eavesdropping on Iran in the event of a crisis.
This 'communications fingerprinting,' as a document called it, is the key to what the N.S.A. does. It allows the agency’s computers to scan the stream of international communications and pluck out messages tied to the supreme leader. In a crisis — say, a showdown over Iran’s nuclear program — the ability to tap into the communications of leaders, generals and scientists might give a crucial advantage.”
Source: The New York Times, 3 November 2013

This is part of criminal and inhumane activities of US upon which they should be prosecuted and held accountable. If Russia, China or Iran possesses such capabilities and used it in a fraction of what US has ilegally be doing. There would have been uproar around world and the west will have label them as THREAT to the world and rest of the world will have follow suit to condemn them in the highest decree possible.

It is just unfortunate the whole world keep quiet and none could frown at US atrocities, perphabs we are all too scared to undauntedly and boldly accuse and question it wrong doings. US enjoys impunity over all it atrocities, the only country in the world that can accuse the citizen of another country of been a terrorist then attack and kill him with drone with impunity, the only country in the world that can launch unwarranted war of aggression on another country with impunity.

These guys are so good, wether it be their various military branches or secret police, spies, agents you name it -- they are all pros and hold the upperhand. They have figured out how the Iranian regime operates. They seem to know this regime inside out.

History's most boisterous empire will be remembered with so many things including this capability !!.The clock is ticking steadily to a stage where the center will no longer hold ! ,it is then that things will fall apart.

@-I think the most humiliation is the case of the German Merkel who had her personal phone tapped!.Now if this entity [Damn beacon of democracy] know not, spares not even friends and Allies ,no body expected them to spare IRAN.

With such awful espionage machinery and mechanism that places the US second to none in the globe,will it rise up to the occasion to answer some very serious question to the world about the events of 9/11!?!.

There was no need to wage merciless wars killing innocent people in Afghanistan and Iraq with these capabilities!. it is interesting to note that the NSA could not intercept the TALIBAN'S mission when they Planned and argued in the open field ! to down the chopper that carried the Navy seals who killed Mr Osama bin LADEN.

No amount of spying will save this Empire from kissing its destiny!.-SPYING IS A TWO WAY TRAFFIC and let the world brace for NEWS!!.

In a country called Iran occupied by islamic dictatorship,many cranes are used for hanging. So why were khamenei's aids fretting to find a crane?

Still believing in all-out American hegemony and their media claims of super-prowess at everything ? Yes they're "so good" and yet they've been unable to map and target tiny Serbia's air defenses correctly in 1999 despite the country being something like 1/23 of Iran's surface and their best weapons got fooled by cheap mobile decoys deployed in large numbers by the Serbian air defense who took down a cutting-edge F-117 billion dollar stealth plane with modified SA-3, Vietnam-era batteries, and after one entire month of intenseo SEAD missions lost only a couple radar dishes to hundreds of wasted HARM missiles. They're also so good they weren't able to keep up with North Korea's nuclear program and exact number of weapons and are unable to act on it, despite the country being almost a micro state. Yeah right they're so good they've figured everything inside out of the IRI. But strangely were unable to even slow down Iran's cheer and growing influence over half of post-occupation Iraq and Lebanon on most critical regional issues. Yes, everybody should have given up their weapons even before having to face them gods, definitely. Fortunately the Koreans, then the Vietnamese, and more recently even part of the Iraqis (notwithstanding the catastrophic situation their nation is enduring now after its sectarian fabric got torn apart but that's another sad story) thought otherwise and decided to refuse their unquestioned dominance and diktat, and pay the price in blood for it, no matter how overwhelming was the US technical prowess. The absolute scope of their obsessive eavesdropping on every single country of the planet and every single one of its citizen including their own, to be able to keep an edge in commercial and industrial competition is at the contrary a sign of decline-induced paranoia, not a sign of maintained supremacy. And for that, they are about to lose critical military strategic partnership with Brazil, Latin-America most powerful state, to Russia's aerospace sector. No more F-xx or whatever for Roussef indeed. Even their EU lackeys have shown some uproar at least symbolically now, and are slowly but surely partnering to cripple the NSA's access to their data (would it be only for their own compromised economic interests), which will prove dire for PRISM in general, a fact countless affiliated US official acknowledge as the single, biggest and most lethal blow to heir intelligence community in its entire history so far, with consequences going way beyond its circles for the US in general. And do I even need to remind of the weeks old Syrian debacle ?

What I'm trying to reach is that is just not enough to know, hear and see everything , you have to be able to act on your grand projects with support from your allies. An ability that seems to be less and less within grasp of their waning hegemony, though of course they still hold 1st place in raw military capability and the projection capacity that comes with it, I will be the first to say ! That simply doesn't change the current tide in its contested posture in a more and more multipolar world.

Hell, the very article's revelations and existence are bad news for the US Intelligence Community, have you missed the beginning of the post : "The New York Times on Sunday published new details on NSA documents obtained by Edward Snowden." Yes, a million thanks to him, who gave up a brilliant secure and promising career for the sake of defending the old virtues this great Nation once truly held and applied as fundamental principles of its existence. Hopefully with time it will get back to this again, and I really hope I can be one to witness it. There are lots of wonderful people with wonderful abilities and potential within its population with a true desire to contribute to mankind in a genuine and selfless way while hating what their leaders do both abroad and at home, if only their leading class wasn't so corrupt and powerful !

The Empire may crumble due to the huge waste of funds, on its "faked" defense goals and financing of all kind of spying, because previous training of Osama and "incubating" more Osamas in Syria and somewhere else, doesn't sound like a sane defense strategies .

Today they take money away from the most vulnerable; who paid their taxes, and give themselves salaries and pensions for their faked jobs' goals...

Toomorrow, they will not have money for those previous "faked" goals, and will also face a choice to further dismantle their welfare system, or to face a public revolution...

The Soviet Union, which at its end, had lesser disparities in its society, crumbled from the economical reasons, which were created by actions similar to the present world Empire's ones....

it's not a crime to intercept Khamenei and his aides' communication..... the crime would be in regarding these people as decent.

Don't delude yourself. The US is not the Soviet Union. If you want comparisons then compare the bankrupt islamic republic to the Soviet Union. Right now the islamic regime is involved in a war in Syria and is wasting billions trying to prop the Syrian regime as well as Hezbollah in Lebanon up. And at the same time its economy is in free fall and leading to bankruptcy.Why do you think the US is playing this double standard game in supplying rebels and at the same time trying to make a "deal" with the islamic regime? Instead of trying to spit out the usual dribble try to think outside your box for a change.

As opposed to "decent" people like your good buddies obama or pahlavi? >rolls eyes<

Anon 4:59 AM.......What ever they are,they are a damn site more humane compared to those thieves and murderers like your buddies in Iran.