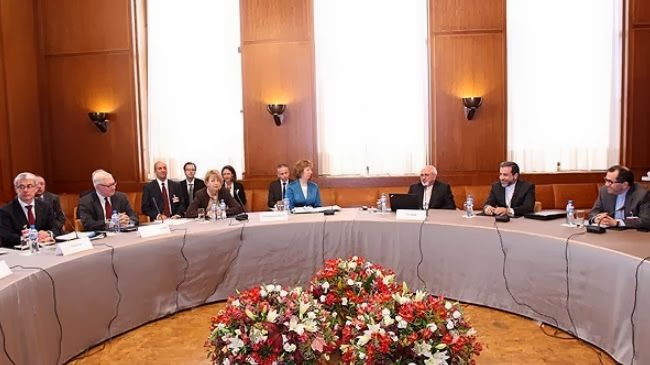 Iran state-run Press TV, quoting a Russian diplomat, reported that Secretary of State Kerry has “distorted” essence of Geneva talks. Kerry had said that all the six major powers had ultimately agreed on a draft proposal that was not accepted by Iran in the last hours of the talks in Geneva.
“The joint document that was drafted satisfied Iran, but since the decision at the talks is made by consensus, it was impossible to reach a final agreement,” the unidentified Russian diplomat was quoting as saying. “But this was not the Iranians’ fault.”
“Such interpretation utterly simplifies and even distorts the essence of what has happened in Geneva,” the Russian diplomat added. (Press TV/Interfax, 12 November)

“Mr. Secretary, was it Iran that gutted over half of US draft Thursday night? And publicly commented against it Friday morning?” Zarif had tweeted. “No amount of spinning can change what happened within 5+1 in Geneva… But it can further erode confidence.” (Twitter/Press TV)

“We were very, very close actually, extremely close,” Kerry was quoted as saying in an interview on Monday with the BBC. (Press TV, 12 November)

File photo: The Geneva Talks (Press TV)
Posted by Nader Uskowi at 7:48 AM

Keep whining you low life murdering thieving mafioso (who do that to your own people). No one cares.

When it comes to "distorting" Press TV aka the regime are the experts.

I see you categorize Press TV as "state run". Shouldn't you do the same for BBC? Both are government funded, and in the case of the latter, operates under a Royal Charter[8] and a Licence and Agreement from the Home Secretary.

Press TV is funded by a mafia organization by the name of "islamic republic". BBC that helped those gangsters gain control of Iran through lies and deception and still continues to do so is funded by public licence. That means the British public has to pay a licence fee of £180 per annum to Ayatollah BBC,not the British government.

With respect, only the foreign service section of the BBC is partially government funded, every British household have to pay about $18/month license fee to keep it independent of the government. I think BBC is probably one the world's best-known and most-respected voice in international broadcasting.

no, fanboy. the censorship and repression of the press is far more advanced in Iran and PRESS-TV is notorious as a source of bullshit and lies.....that PRESS-TV is thoroughly dishonest is likely why you are drawn to try to defend it.

It was france that didn't agree with the talks. Shame on France.

Also VOA Persian (voice of America),Radio Farda are all US government-funded media.

Mark, if you go by Press TV charter, you probably are right to assume that this is another state supported TV station. And if you go by the constitution of the Islamic Republic, you might even think that the clerical-led establishment is one of the greatest democracies ever created on earth. But unfortunately you are talking about a country that has one of the highest numbers of journalists in detention, boasting a state censorship and control (and yes, ‘state-run’) apparatus that is the envy of many dictators around the world. I wish the Press TV were the Iranian version of the BBC. The day that happens, I’ll be the happiest man in the world

Let's everybody come to their senses and agree on a deal. Sounds like the arak plant is the only sticking point and Iran has no need for a plutonium plant.

There has been lot of "noise" about all those negotiations, but is here anyone who has tried to explain what and whether, the most sancrions will be lifted soon; for that " EXTREMLY CLOSE (DEAL)"?

One has to remember that beside the Supreme Leader's approval, it is srill in the Majlis' approval cometency in addition to the Zionist controlled Congress.!!

It will never happen mr. Uskowi, instead of that, you will sooner see demise of the Zionist ideology.

Nader UskowiNovember 12, 2013 at 7:57 PM
The point is that the western media are hardly unbiased and impartial,especially when it comes to iran

AnonymousNovember 12, 2013 at 9:26 PM
Its not a plutonium plant,it is a heavy water reactor that iran has every right to build and operate,the easiest solution would be for iran to agree to export the spent fuel abroad for reprocessing provided that it can buy the fuel for the reactor,sadly this seems to be a french/israeli attempt to sink the talks by making stupid demands,let us see whether the rest of the p5 are willing to stand up to the french on this issue as this is the last chance the west will have for a deal with iran

@ 8:22 AM,
Yes, but equating Press TV to BBC when it comes to state control was the point of contention here, don't you agree?

You may sometimes find some incorrect letters in my comments, due to probabilities that "malwares" have been installed on the way, between my computer and the emergence of my comments at the final webside....