Details of the interim nuclear deal agreed upon at Geneva - Updated 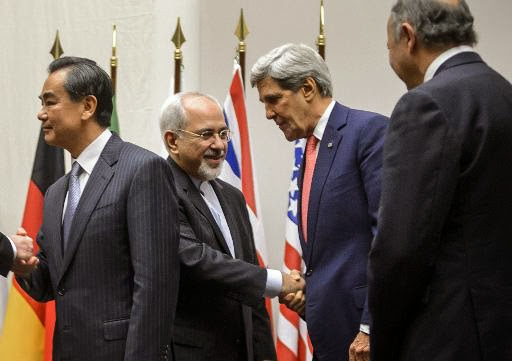 • Iran halts enrichment above 5% and dismantle the technical connections required to enrich above 5%.
• Dilute below 5% or convert to a form not suitable for further enrichment its entire stockpile of near-20% enriched uranium before the end of the initial phase.
• Not install additional centrifuges of any type.
• Not install or use any next-generation centrifuges to enrich uranium.
• Leave inoperable roughly half of installed centrifuges at Natanz and three-quarters of installed centrifuges at Fordow, so they cannot be used to enrich uranium.
• Limit its centrifuge production to those needed to replace damaged machines, so Iran cannot use the six months to stockpile centrifuges.
• Not construct additional enrichment facilities.
• Not increase its stockpile of 3.5% low enriched uranium, so that the amount is not greater at the end of the six months than it is at the beginning, and any newly enriched 3.5% enriched uranium is converted into oxide. Iran has committed to no further advances of its activities at Arak and to halt progress on its plutonium track. Iran has committed to:
• Not commission the Arak reactor.
• Not fuel the Arak reactor.
• Halt the production of fuel for the Arak reactor.
• No additional testing of fuel for the Arak reactor.
• Not install any additional reactor components at Arak.
• Not transfer fuel and heavy water to the reactor site.
• Not construct a facility capable of reprocessing. Without reprocessing, Iran cannot separate plutonium from spent fuel.
• Provide daily access by IAEA inspectors at Natanz and Fordow. This daily access will permit inspectors to review surveillance camera footage to ensure comprehensive monitoring. This access will provide even greater transparency into enrichment at these sites and shorten detection time for any non-compliance.
• Provide IAEA access to centrifuge assembly facilities.
• Provide IAEA access to centrifuge rotor component production and storage facilities.
• Provide IAEA access to uranium mines and mills.
• Provide long-sought design information for the Arak reactor. This will provide critical insight into the reactor that has not previously been available.
• Provide more frequent inspector access to the Arak reactor.
• Provide certain key data and information called for in the Additional Protocol to Iran’s IAEA Safeguards Agreement and Modified Code 3.1.
• The IAEA will be called upon to perform many of these verification steps, consistent with their ongoing inspection role in Iran. In addition, the P5+1 and Iran have committed to establishing a Joint Commission to work with the IAEA to monitor implementation and address issues that may arise. The Joint Commission will also work with the IAEA to facilitate resolution of past and present concerns with respect to Iran’s nuclear program, including the possible military dimension of Iran’s nuclear program and Iran’s activities at Parchin.
• P5+1 has committed to not impose new nuclear-related sanctions for six months, if Iran abides by its commitments under this deal, to the extent permissible within their political systems.
• Suspend certain sanctions on gold and precious metals, Iran’s auto sector, and Iran’s petrochemical exports, potentially providing Iran approximately $1.5 billion in revenue.
• License safety-related repairs and inspections inside Iran for certain Iranian airlines.
• Allow purchases of Iranian oil to remain at their currently significantly reduced levels – levels that are 60% less than two years ago. $4.2 billion from these sales will be allowed to be transferred in installments if, and as, Iran fulfills its commitments.
• Allow $400 million in governmental tuition assistance to be transferred from restricted Iranian funds directly to recognized educational institutions in third countries to defray the tuition costs of Iranian students.
• Facilitate humanitarian transactions to Iran that are already allowed by U.S. law. Humanitarian transactions are those related to Iran’s purchase of food, agricultural commodities, medicine, medical devices and also facilitate transactions for medical expenses incurred abroad.

The world just learnef how much it costs to buy iran (not much, and actually it's not even buying them because it was iran's money in the first place)

Not sure what to make of the agreement. It appears that 5+1 have managed to successfully freeze any progress made in the development of the nuclear technology since Ahmadinejad's took over of 2005, but IRI have only managed to reset the sanction clock back to January 2012 - all the UN sanctions will remain in force. However, this is a positive step and Zarif's team did the best that could realistically be achieved. I strongly believe that nothing could have been achieved if it weren't for the congenial nature of Zarif and his team - they deserve our congratulation.

Not the best deal....but for 6 against one i think iran has get what it wants...for the first...

to all haters....just think of the business u now can start with iran without sanctions.
and even if it is not enough. Think of the ppl in iran...the can maybe start now some business...and all things will get cheaper now...pls dont only think about yourself that u would prefer the US to bomb iran so u can go back home and end your time ib ghorbat. ;)

I congratulate Zarif and his team. This is a step toward a much desired end. This will at least take some pains off Iran's neck. It is not at all easy to come far, Obama needs what he can easily sell to the congress at home, it think Iran has given him one.

So if we accept that nuclear technology is not mainstream for Iran or is not an export market, then it was prudent to get out of this mess. The important outcome is now the fact that Iran is talking with others. Communication is basis for any interaction. Without communication the winners were the AIPAC in US and their equivalent in Iran who have taken the country to ransom since revolution.

There is also another angle to this. Most Arab countries plus Israel plus Turkey and Russia and China were seeing this Iran/US animosity to their advantage. Let us face it without US and Western World Iran has no partners. Some argue otherwise. I do not. All these so called new friends of Iran have used Iran to milk her so to speak. Turkey a near bankrupt and corrupt country at start of Iranian revolution has benefited from Iran’s isolation. Isolation is always a blessing for opportunists who have built a massive export/money laundering business from the demise of Iran. They flood everything from Porsches to cigarettes and carpets (from Turkey) into Iran. This is not sustainable.

Iran needs to build up confidence and relation with the West. There is no other way. After few years of hard time, the economies of Western countries are getting back into the right track. Most US and UK economies are doing well these days and hopefully within the next couple of years the economies will be back into track. This will help everyone including Iran, especially in oil and gas industry.

So overall I see this limited agreement as a start for better relations between Iran and US who can agree on limited areas but crucially they can agree to disagree.

Vow, total capitulation for a mere $4.2 Billion. Must be a sign of desperation no matter how the government of Iran wants to spin it. What a disgrace. These people put the Iranian people through so much suffering for what?
Watch Iran and the west part 3:

It all could have ended many years ago without so much humiliation of the Iranian population.

Agree,why the hell all this propaganda and spin causing our people to suffer so that we get some of our own money back from oil sales in return to halt or even close billion dollar installations overnight ?

Because Ahmadinejad was a moronic imbecile from some backwoods ghetto of Iran, who should never have been President in the first place.

Ahmadinejad was the king of the gedazadeh. He wore the same goddamn jacket from the first day of his presidency to his last - totally unbefitting for someone of his stature.

The sanctions arn't over.This is just a six month respite to see if regime can be trusted in what they said as regards the nuclear deal. Ahmadinejad had $800 billion and look what happened. And you expect $4.5 billion to have any effect on the poor situation on Iran??

Yes,congratulations in turning Iran into a beggar bowl nation. Hurrah !

Considering that the west was forced to back down on all its key demands,not to mention the fact that they actually had to sit down and negotiate with iran,I think irans done pretty well out of it,of course what really matters is what the west has to offer 6 months from now,that will determine if they`re really serious or not