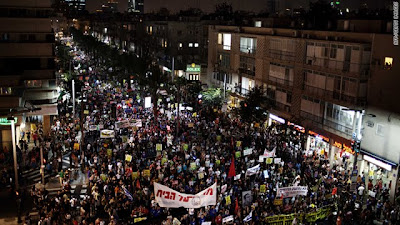 Hundreds of thousands of Israelis took to the streets of Tel Aviv on Saturday night in what appeared to be the largest social protest in Israel’s history. The protesters, calling their latest action the “March of the Million”, demanded government action to curb the growing cost of living in the country.

“The state has money that goes to the wrong places, there is no equality. The money doesn't come back to the people,” said Shmuel Lim, a protestor in Tel Aviv [CNN, 4 September].

Saturday’s protest was the culmination of a six-week-long social protest movement that began with a small group of activists pitching tents in an exclusive neighborhood of Tel Aviv to protest high rents.

Well this no big news. It is happening all over the World from Spain, France and other places.

At least in Israel they allow people to demonstrate. Rather than blowing this out of proportion look at what happend to those in Iran who were demonstrating against Lake Urumiah drying up. A simple environment issue and three hundred people are already arrested.

In a free society one can demostrate and make his/her opinion known. That is what this excercise is all about.

Just compare this to Syria or Iran!

Thank you my friend you are a person who knows what they are talking about.In a democracy people must be allowed to demonstrate and question government and most importantly have a free press.
Government is the servant of the people not the other way round that is when things will start to go wrong.
I hope one day very soon Iranians will be able to protest without fear of execution or imprisonment.

isreal a free deomcratic government spends nearly 8 percent of gdp on the military and has tried shift of the welfare on its extensive private orginasiations whove spent there money on the newly arrived settlers not on the working class, only nationalism and high has kept the peace

So Mr redz by not agreeing with the murdering theocratic regime we become Iran haters or liberals and what's wrong with liberals?

You most likely live in a democratic country in the West whose run by "liberals" so what's your problem with this?

No Mr redz the "Iran haters" and fascists are the ones in Tehran who have bloodied their hands with the blood of our people.

The statistics the regime publishes have been altered to match their bogus propaganda so that gullible people can believe their "achievements".

“In a free society one can demostrate and make his/her opinion known. That is what this excercise is all about.”

…. And some ‘free’ societies you don’t even hear much about demonstrations!!!

what happend to those in Iran who were demonstrating against Lake Urumiah drying up.


Perhaps those demonstrations will have an impact...

‘Officials determined to save Lake Urmia’

Maybe some people are arrested in the US but be realistic in Iran not only they shoot people from roof tops they also arrest and torture them or make them disappear for ever.

To protest in Iran you are considered as( WARING AGAINST GOD)

Therefor you are seen as easy target by regime to eliminate in the name of ALLAH.

When will Americans dare engage in such protests in wealthy American cities?

Demos of osraelöi do not care us

there is place for a nonislamic state in middle east.

"When will Americans dare engage in such protests in wealthy American cities."

Americans have always dared to engage in protests in poor or wealthy American cities it's their constitutional right and that's what made America great!

Nothing is perfect but things can be challenged and amended without fear or torture.

"Nothing is perfect but things can be challenged and amended without fear or torture."

oh realy, american system has had meny significant protests because of bad organisational structure of movements, considering the US tortures people outside the country and the us law inforcement is on that has the worst reputation among developed countries if things ever get bad, i hate to see what system may do

"there is place for a nonislamic state in middle east."


why not? the islamic ones haven't been all that great and the world belongs to everybody.

Of course and that is the reason 300 of them were arrested for a small protest!!

“To protest in Iran you are considered as( WARING AGAINST GOD)”

Perhspa GOD did hear those protesting in Iran!! :-)

Iran to use water right in Aras to save Lake Urmia

Iranian authorities have approved a $900-million budget to stop the rapid drying of Lake Oroumiyeh.

Lake Urmia (Orumieh) is a salt lake in northwestern Iran near Turkey. The lake is between the provinces of East Azarbaijan and West Azarbaijan, west of the southern portion of the similarly shaped Caspian Sea. It is the largest lake inside Iran, and the third salt water lake on earth, with a surface area of approximately 5,200 km square (2,000 mile square).

Iranian media report that the head of Iran's Organization for the Protection of the Environment has announced that 950 billion toumans ($900 million) has been allotted to redirect water from the Aras and Kurdistan Rivers to Lake Oroumiyeh.

Despite approval of the budget, MP Kazem Farahmand told the Khaneh Mellat website that "hasty" decisions will not solve the problem of Lake Oroumiyeh.

"Salvaging Lake Oroumiyeh without identifying the causes of it drying out is impossible, and any hasty decision in this regard will only lead to further environmental costs," Farahmand maintained.

The president's parliamentary representative has announced the formation of a committee to resolve the problems facing Lake Oroumiyeh. Among its proposed projects: redirecting water from the Aras River and building a 40-kilometer tunnel to direct underground waters from Zaub to Lake Oroumiyeh.

Talk is cheap especially in Iran by the regime and just after the protests so that they can calm the people down and then nothing.
$900 million is a lot of money especially when the regime is not receiving the hard currency from oil revenues they rather give that money to their paid thugs so that regime can stay a little longer.
As I said don't count on these people they habitually lie all the time especially when it comes to saving their own necks.
As for their "News"papers and media I wouldn't trust them as far as I can spit.

And another thing you go to Iran and protest against the regime see what happens to you.
If they don't declare you as Waring against God and see fit to harshly deal with you then I will enroll as Khamenei's personal ass wipe !

Yes looks like god answered their prayers but lets see what happens next. I wouldn't hold my breath if I were you.

HUMBLE GRIEVERENCES:
DEAR SIR MR USKOWI : in line with your recent code of rules HOW do you justify blocking my comment that had some critism on ISRAEL AND THE USA -concerning tha South African sanction--something that is known the world over, BUT at the THE SAME TIME FEEL OKAY TO COMMENTS LIKE -ANON 15 posted at 6 7:40 that evidently breaks one of the rules there!!.[mind you we dont discuss asses here]

Don't get a nervous breakdown.

I personally say the Anon was right what he said in a political content he didn't attack commentators but politicians a huge difference.

Note: His use of words is colourful but not rude at the least.

Really redz you believe your own propaganda because if that was the case how about the recent protests regarding lake Orumieh and the arrest of 300 people?

And redz what are "Islam and it's values"?
Is it when the theocracy shoots from rooftops at protesters or when they arrest torture rape and kill in the name of Allah?

Come on redz you know full well that what your commenting is not true.
So try to be true to yourself before you try to convince others.