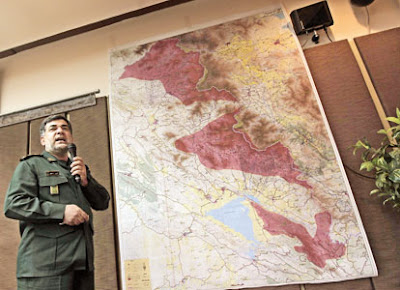 “Brigadier General Abbasali Jannesari was martyred during clashes with the PJAK terrorist group in the western parts of the country,” said an IRGC official [Fars News Agency, 9 September].

Gen. Jannesari was the commander of IRGC Artillery, Missile and Air Defense Group, based in Isfahan. A state funeral is scheduled for Saturday in the city. 10 IRGC troops also died in the clashes while nearly 30 PJAK militants were killed.

In July, IRGC launched a major offensive against PJAK militants, shelling districts near Iraq’s border for weeks. Last Monday PJAK declared a unilateral truce and called on Iran to reciprocate in order to prevent further bloodshed.

The IRGC said a ceasefire by PJAK would be “meaningless” if the group refused to withdraw its forces from the Iranian territory.

THESE BRAZANE ATTACKS BY THE PJAK ON IRAN'S INTERESTS AND MILITARY OFFICERS HAVE A VERY SAD ENDING.who will teach these stooges that there is always a legal way out of any problem?

RIP for your struggle against the terrorists