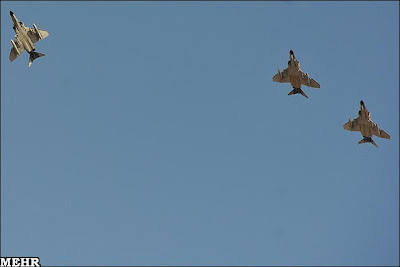 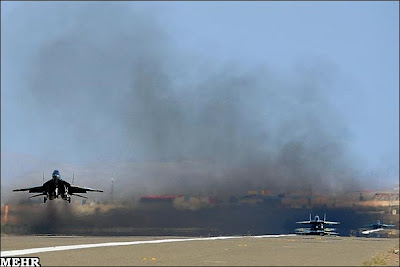 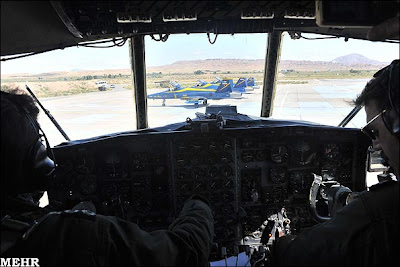 Saegeh (Thunderbolt) demonstration aircraft seen through cockpit of a C-130 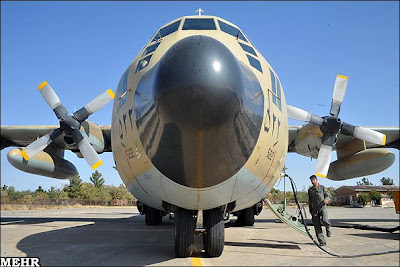 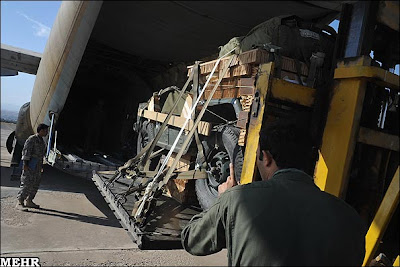 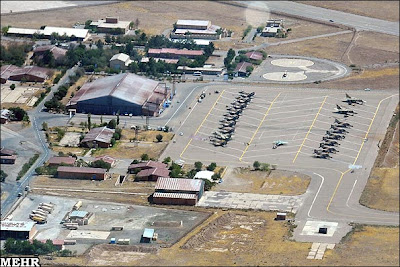 These guys are professional and know their equipment very well and they deserve the best in everything including pay.
The air force needs to be equipped with new planes unfortunately as the current status remains this will not happen but looking forward to a brighter future !

What a glowing tribute to IRIAF and its skilled technicians (hamofars), engineers and excellent pilots for keeping 30 years plus old equipment and aircraft in pristine working order despite pathetic US sanctions. The IRIAF despite all obstacles has managed to keep over 55 F-14A in upgraded flying order along with over 250 F4E, F5E (including a dozen twin finned local variants), 30 C-130 (upgraded) and dozens of other western-eastern aircraft including Mirage F1-EQ, Chinese J-7 (flying coffins), 40 SU 24 (Strike Fencers), 20 SU 25 (Frogfoot) 36 SU 20/22 (Fitters) and over 80 MIG 29 to SMT standard. Contrary to usual "western" nonsense about Iranian military, the IRIAF despite many handicaps is still a very potent air arm and can inflict severe pain on any aggressor. The pilots of the post jange tahmili generation are far better trained by war veterans and the Shiraz air academy is world class.

Iran should be paying the highest priority to acquiring modern aircraft, particularly interceptors like the Russian SU-30 or better. The mullahs have mismanaged military bi-lateral relations with Russia in particular. In the post Soviet era of the 90's the Russians had offered a good airforce package including MIG-31 and SU-27 but the inept Rafsanjani government nickeled and dimed the the Ruskies and the deal simply fell through due to immense US/Zionist pressure. Now it is very difficult to obtain modern aircraft, but not impossible if some astute diplomacy is implemented. Russia and China are both fed up with US warmongering and would prefer a strong Iranian military. China's J10 and J11 is another interim possibility.

----"Russia and China are both fed up with US warmongering and would prefer a strong Iranian military."----

nah, neither Russia nor China likes or trusts the Iranian theocrats and they're only going to do business with them when the Iranians pay well over market for anything that Iran wants from them.

neither country is going to sell Iran anything but junk, including military junk. no advanced aircraft and for dang sure no S-300 air defense system and neither iran's pitiful threats nor their silly lawsuit is gonna change that.


there is absolutely no way for iran's military to ever match up with NATO.
the Iranian air force is going to remain small and out of date and the iranian "navy" is a bunch of old submarines, ahandful of even older ships and a bunch of rubber-sided boats.

IRAN SHOULD NEVER PAY HIGH PRIORITY IN ACQUIRING MODERN FIGHTERS.IT is only a naive person who can imagine that going for a arms buying spree is the viable thing for Iran to do.AGAIN THE ISLAMIC ESTABLISHMENT HAS PROVEN TO THE WORLD THAT IRAN CAN AFFORD TO REACH SELF SUFFICIENCY IN DEFENSE TOOLS,BY USING DOMESTIC EXPERTISE.A Nation can not boast of military capabilities and independent if all what it has in its armory is products from the defense industries of its enemies!!. I WOULD THERE URGE IRAN TO INVEST MORE IN RESEARCH AND TECHNOLOGY AND ALLOCATE MORE FUNDS IN THE UNIVERSITIES AND RESEARCH CENTERS.

Anon. Sep. 12 8:54 pm
Could you please tell us where you get these numbers from.
55 F14- A's still operational?
Iran got exactly 69 F14-A's from the US. Are you telling us that only 14 of these F 14's were lost during the 8 year war? Even the Islamic Republic air force is saying that around 20 F14 A's are operational.
Iran received 29 MIG 29 from the Russians. Saddam flew less than 10 of them to Iran and the rest to Jordan as he did not trust the Iranians. Where do you get the figure 80 Mig 29 ?
Please be accurate and objective.

It is rather mute and pointless commenting on some really ill-informed comments about the IRIAF by the usual anti-Iran element that post nonsense without even taking the time to learn about Iranian history or ground realities.

The FACT is that Iran ordered 80 F-14A fighters from Grumman for $3.8 billion in 1974 to save Grumman the USA manufacturer from bankruptcy in the post-Vietnam defeat era when the US warmongering industry was in chaos.

Some 79 of the F-14A were delivered up to January 1979, and one was held-up in Long Beach at Grumman testing facility and never delivered. Some of us who are familiar with the aircraft and military aviation can attest that this was the first of the 4th generation fighters with fly by wire capability with a powerful Westinghouse AN/AWG-9 radar mated to long range BVR (beyond visual horizon) Hughes AIM-54 Phoenix missiles. The radar was one of the first modern systems to track multiple targets and engage bogeys at BVR.

Secondly as correctly pointed out IRIAF only lost 9 F-14A in the eigth year conflict with Iraq. 4more were written off by accidents and engine flame-outs. The IRIAF was able to husband its resources very well during the conflict thanks to the vision of its pioneers like shahids Babei, Javad Fakouri and Sattari.

The IRIAF was left with over 60 fully functioning airframes with very limited metal fatigue at the end of the war and most of these planes have been refurbished, and their weapons systems and radars upgraded by superb IRIAF technicians and engineers.

It may be worthwhile to read up on the IRIAF before posting usual ignorance. BTW, Major and later General Jalal Zandi (RIP) also boasts the world record for F-14 dogfigth kills.