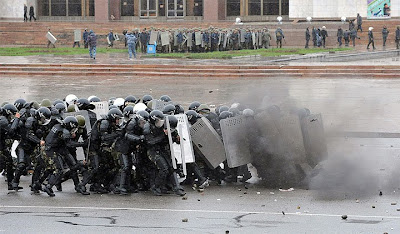 Above: Well equipped Kyrgyzstan antiriot forces
on the brink of disarray. 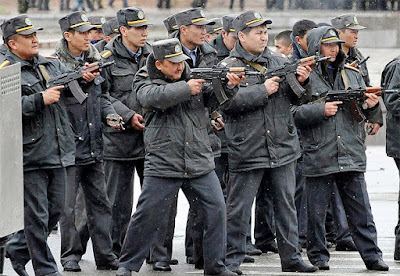 Above: A Kyrgyzstan law enforcement firing line, equipped with AKS-74U "Krinkov" short assault rifles. In contrast, post-June civil unrest, the IRIPF has not distributed battle rifles, assault rifles or SMGs (or most any firearms loaded with lethal rounds) to its antiriot forces. It must be noted this claim is disputed. However there are no photos available to this writer's knowledge of IRIPF firing lines equipped with assault weaponry, using lethal force against rioters. (Excluding the defense of a Basij base in Tehran, where an AK-47 type assault rifle was utilized from a rooftop position.) Above: Kyrgyzstan law enforcement on the run. Abandoned by their own leadership, they are in headlong retreat. Even during the height of Asura rioting, Iran's leadership carried on, resolutely. In Kyrgyzstan's case, the leadership finds itself heavily swayed and manipulated by external foreign powers, whereas the Islamic Republic of Iran remains fiercely independent. This is the fundamental difference between the two cases of civil unrest, and naturally it corresponds to the level of effectiveness between the two countries success or lack of success in combating cvil unrest.

A footnote: Ironic that Kyrgyzstan's government recently attempted to dispute Iran's rendering of its dramatic Rigi capture operation- by changing its own previous reporting- only to now find itself apparently out of power only a few weeks later.
Posted by Mark Pyruz at 5:32 AM

This pic is NOT from Iran:

its from the honduras coup violence

well, Manas airbase is now in jeopardy with Russia and Iran smiling because afghanistan just got harder for US+NATO

One thing i noticed about the IRIPF was their inability or unwillingness to form cohesive phalanx's when charging down protesters. Instead preferring to form loose "skirmish lines" and as a whole, acting as individual policemen rather then a single "block". This would then enable the police to be split up and isolated in addition just not serving as an effective dispersement tool.

At least this is the image I've gathered from the videos and images released and I'm not sure if this is an entirely accurate statement.

Comparing Iran with a 3000 year old history with 76 million people with a small confused identity ex-Soviet Kyrgystan (5 million people and 30% Russian) is not really valid. Iranian security forces are experienced and have faced down all kinds of threats since 1979 from urban terrorism (MKO, Jundollah, PEJAK, Fedeyeen, Tudeh etc) to civil disturbances. Iranian riot police is well trained and with excellent fire discipline. Things could have gotten out of hand if they had used live ammo in last June's post election protests but their professionalism and cool won the day. The shah's ill-trained military under the inept and arrogant Oveissi made the fatal mistake of using live ammo on demonstrators in 1979 and the military collapsed after hundreds were killed at Jaleh square. The present Iranian government has invested in good riot control equipment, excellent pre-riot dispersal and marshalling techniques that control any potential crowd by corralling them into safe zones where they can be contained with minimum force and without the use of live ammo. The tandem pillion riding mass motorcycle riot police tactic are very effective in isolating pedestrian mobs. Iranian riot control tactics are now textbook reading in many nations on how to disperse large crowds with minimum non-lethal force.

So contrasting an ill trained and non-motivated Kyrgyzstan police or militia with highly dedicated, motivated, skilled and well equipped Iranian police, IRGC or even Basij volunteers is not really comparable. The secure law and order situation in Iran, particularly a mega-metropolis like Tehran with 14 million people is glowing testament to the efficiency, training and high morale of the Iranian law enforcement agencies.