For its part, Iran has so far only announced a program of developing this type of air defense weapon system, and no test results have yet been publicized.

New photos have been independently published which are worth examining, as well as a few shots of related air defense radar variants which were also exhibited.

Iran S-300 type launcher variants. The Babr series carriers are not identical in detail, and the launch canisters appear to sit slightly differently on their respective flatbed sections. 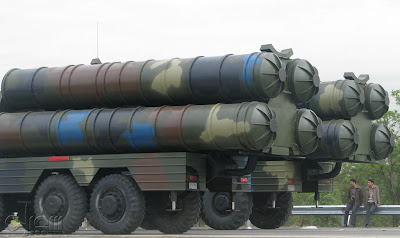 Missile launch canister detail. Circular reinforcements are evident, as are signs of sectional welding to the canisters themselves. 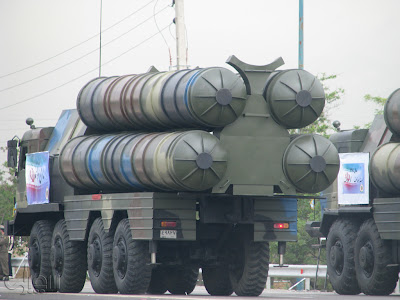 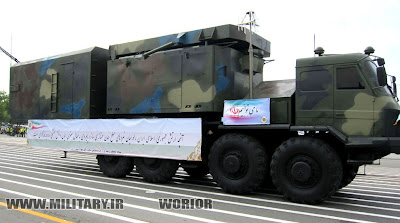 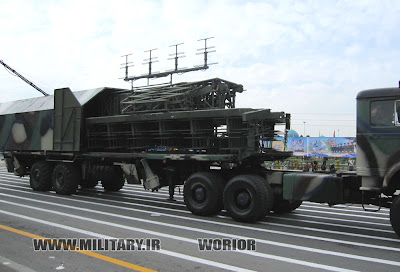 How is this "Iran Big Bird (Tombstone) variant long-range surveillance radar" balancing?
There are no wheels for the rear box - meaning it is absolutely empty. Otherwise the vehicle will topple.

with Iran you never know for sure, could be and could not be,... is it a maybe or are they testing...

I know if I were Iran (as a military force) I would toss a bit of fake that could be true, and keep my cover about my real capacity .

This is calleed disinformation and its there to confuse... or is it real and those discrepancies were intentionally added ?? to keep its enemies guessing ??

at the end of the day, its either war or such little games... I prefere these little games than a war.

iran's a joke. would have been better with the shah.

waiting for weapon test to confirm its performance.anywhere congratulations for the success in manufacturing the weapon with its advance technology

I say Israel is the Joke , since it exists more in some peoples head. financed by milking western economies and killing their own racial brethrens for land and water.

oh boy, heavenly pay back is even worse than the last diaspora dude, start packing loool

The S-300 is being advertised as the only mobile, long-range ADS with (limited) anti-BM and anti-stealth capability thanks to some advanced radar technology: Big Bird and Nebo.

Recently Iran paraded mock-ups(?) of the same radar systems, but probably they already bought the originals. If by now they've mastered (high-power) Phased Array technology, they might have even replicated them.
They also paraded some S-300 missile tube mock-ups, but I don't see them replicating the 48N6 or even the Chinese HQ-9 missile that easily. The HQ at least uses jet-vane Thrust Vector Control (TVC), the same technique used by the Standard Missile (SM) series I believe.
Iran has replicated the SM-1, but without extending its range very much and although the US SM developed into a series of advanced missiles (such as the anti-ballistic SM-3 on the Aegis ships) development in Iran appears to have stopped altogether (problems with jet-vane production, not only for their AA but also for their ballistic missiles as some rumours go, see below).
Instead they seem to have been gambling on the Shahin (Hawk/Phoenix) air-vane type of missiles lately (Mersad system). Even with boosters (Sayyad, SA-2, liquid 2nd stage?) this type of steering won't go far beyond 50km (too much drag) and the Ghareh (SA-5, liquid 2nd stage) can hardly be called mobile.

So can we really expect an Iranian made HQ-9 soon or will it be too little, too late (and too expensive) import?

I don't believe radar systems or integration is the crucial point here, but rather air-vane vs jet-vane steering in mobile(solid fueled) missiles and apparently only jet-vanes (much less drag) let you extend the range enough for an ADS that would scare the Israelis.
Solid fuel exhaust fumes are an extremely corrosive environment for steering vanes and I think EITHER Iran doesn't master this technology, which is not likely but they don't have enough strategic resources (tungsten?) to supply BOTH their ballistic missile AND solid-fuel (long-range) AA projects), OR can't come up with a replacement (carbon-fiber?).
Maybe this "dual-use" missile-component is precisely the reason why Russia at least, under the Missile Technology Control Regime (MTCR), isn't allowed to deliver the S-300 (although strictly defensive) to Iran... perhaps they signed the deal (and took the money) without checking first.
Now they even seem to support a complete arms embargo... well, there aren't that many defensive systems left to be bought from the Ruskis (BTW, what's the status on the Early Warning (IR)AN-140 and KA(mov)-27, convertible into a -31).

For example, consider the Fateh-110. Although ballistic, it fits the long-range AA missile requirements pretty good: solid fuel, mobile, sufficient range. However, no jet-vanes but a rather unique steering system:

why Iran is displaying fake military hardware in parade. Is not it equal to deceiving own people? Because whatever is their capability, US and IDF is surely in picture.

Iran purchased 3 x S-300 launchers from Belarus and started copying it with the idea that one day be able to manufacture its own, but even so they decided to sign a contract with Russia back in 2005 for a couple of more launchers and were expecting them to be delivered in 2007. They decided to purchase even more S-300s because they figured it would take years to produce their own, and they needed to satisfy their immediate defense needs. The ones that were coming from Russia were allegedly modern versions more capable than the ones Iran had recieved previously.

Iran now has an indigenously produced prototype based on Belarussian S-300 called Bavar-373 mainly made up of Russian technology along with Iranian components, domestically enhanced by Iranian engineers, with the assistance of Russian expertise, to match the ones that were never delivered.

Its maximum potential is classified.

No one will ever know till thesssss hits the fan! Let the big shot israelis that you love find out!

Those so-called S300s displayed above are known fakes.
Iran cannot reverse engineer the electronics and special codes of the radar and missile system of the S300.Anybody that thinks so,knows nothing of the inner workings of such systems.
India which is more advanced can't reverse engineer such a missile system,let alone Iran.
Only thing going for Iran is the Shahab missile which can hit Saudi oil fields and upset the oil market.But remember that Iranian oil fields will be struck as well.So a word of warning to those dreamers who think that the missiles will be going only one direction.