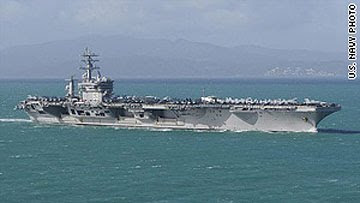 An Iranian navy plane that approached a U.S. aircraft carrier last week was flying as low as 300 feet as it neared the USS Eisenhower, U.S. military officials said Wednesday.

The incident, first reported by CNN on Tuesday, came as Iran was beginning a series of military exercises last week meant to show off their military prowess.

The Eisenhower was on duty in the Gulf of Oman in the northern Arabian Sea, in support of the Afghanistan war efforts, when the Iranian maritime patrol aircraft flew within 1,000 yards of the vessel, according to military officials.

Adm. Gary Roughead, the top Navy officer, confirmed the April 21 incident. The Iranians were "not provocative or threatening. As long as they are professional and not threatening or reckless, it's international space," he said.

Radar on the Eisenhower and other U.S. ships in the vicinity closely tracked the Iranian aircraft as it approached the aircraft carrier to ensure it maintained a nonthreatening path, Roughead said. A senior U.S. military official said the Iranian plane was tracked by U.S. units for nearly 100 miles before it reached the Eisenhower.

The Iranian aircraft was a Fokker F27 that was unarmed, officials said. It remained in the vicinity of the Eisenhower for about 20 minutes before leaving the area, according to the senior official. The Eisenhower had just finished a series of carrier aircraft flight operations and a resupply at sea mission.

U.S. military officials continue to emphasize that recent encounters with Iranian naval forces in the Persian Gulf have been professional and without confrontation or problems. The U.S. Navy takes great care to try to stay out of the way of any Iranian forces in the region, officials said.

Initial reports described the Iranian aircraft as a "fighter jet," however it has subsequently been identified as a propeller-driven Fokker F-27. IRIN (Islamic Republic of Iran Navy) aviation fly the Fokker F-27-400M Troopship and F-27-600 Friendship, and sport a distinctive 3-color camo pattern. IRGCN (Islamic Revolutionary Guard Corps Navy) aviation were known in the past to fly a F-27-600 Friendship, an example of which is grounded at the Tehran Aerospace Center. The IRGCN plane is painted white with grey undersides. The IRIAF and IRIAA also fly F-27s. 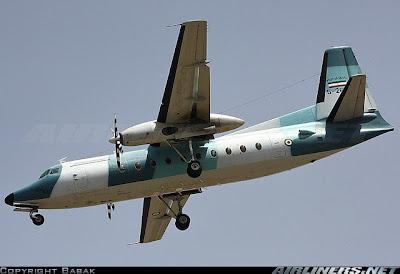 Above: IRIN Fokker F-27-400M Troopship
IRIAF spokesman Amir Alavi asserted that routine patrol flights are within the Iranian military's legal rights, and stated that "our planes might have passed near US ships in this corridor [Daryā-e Omman] but there would be no cause for complaint in the matter."

Other Iranian media sources emphasized that CNN was deliberately attempting to raise tensions between the US and Iran, over conduct that is considered routine in the region.

Photo: Babak at Airliners.net
Posted by Mark Pyruz at 4:11 AM

CNN has been impudent recently , been calling the Persian Gulf, other unmentionable names..

I wrote an email to Reza Sayyah and called him a traitor for working for them. and not correcting and insisting for a correction.

or is this a blatant provocation for throwing their reporters out of Iran ??

Whatever it is, screw them they are anti Iranian and biased never believe them and always criticize them and see that as a national duty

im iranian american BTW- why would iranian navy send a fokker-27?i know iranian goverment very well,they were provoking usa eisenhower to attack it..to provoke a war..they have no purpose on patrolling this area

Let's keep perspective here. The US navy now mostly keeps its large CV's (Carrier Vessels) outside the straits of Hormuz and the shallow heavy commercially travelled Persian Gulf, particularly when IRGC holds its missile exercises. Iran being the predominant power in the Persian Gulf has routine maritime patrols over shipping lanes. This task is normally routine and done by the P-3 Orions and sometimes by F-27 Fokkers operating out of Chah Bahar. This is nothing to be alarmed at. The only hype for the US media is their efforts at sensationalizing it. Iranian pilots are generally very confident and professional and do their routine duties quite brazenly. The USN is quite used to these flights and both sides avoid escalation for obvious reasons.