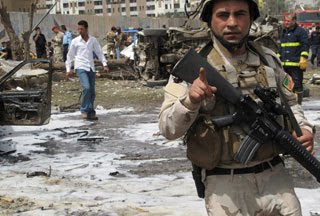 More than 50 people were killed and 200 injured during three near-simultaneous suicide car bombs in Baghdad on Sunday. The largest of the massive explosions occurred near the Iranian embassy. An official with the Iranian Embassy said the embassy building was damaged but there were no reports of casualties inside. A bank building adjacent to the embassy was severely damaged. The suicide bombers also targeted other foreign embassies in the city’s Mansur district.

actually , the German and Egyptian embassy were also hit, but the Iranian being hit supposedly echo's better in accordance with pro US and anti Iran propaganda.