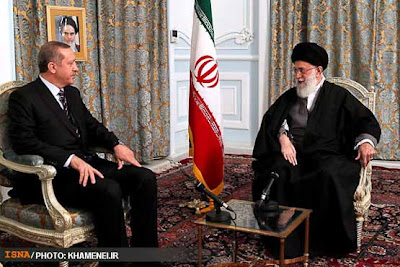 US Secretary of State Hillary Clinton conferred with Turkish Prime Minister Receb Tayyip Erdogan today about his recent visit to Iran. It is widely believed that Erdogan carried an oral message from President Obama to Iran’s Supreme Leader Ayatollah Ali Khamenei. Erdogan met Khamenei on Thursday in Mashhad. No details on Obama’s message or Erdogan’s meeting with Khamenei has yet emerged.

Turkey will host the highly anticipated meeting between Iran and the six major powers on Friday 13 April on Iran’s nuclear program. There are some signs that the two sides might close some gaps between them, with Iran allowing much more intrusive inspections of its nuclear facilities and the West agreeing with a uranium enrichment program capped at 5 percent purity.

Clinton said after a security conference in Saudi Arabia on Saturday that time is running out for diplomacy over Iran's nuclear program, adding urgency to the 13 April meeting.

"We enter into these talks with a sober perspective about Iran's intentions. It is incumbent upon Iran to demonstrate by its actions that it is a willing partner and to participate in these negotiations with an effort to obtain concrete results," Clinton said. [AP, 1 April].