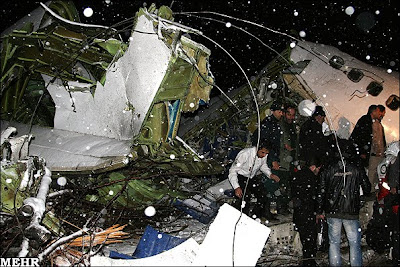 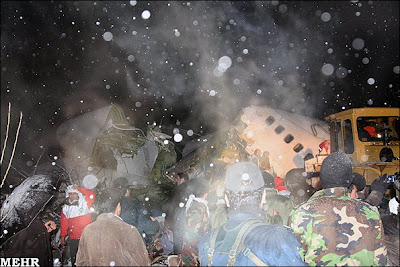 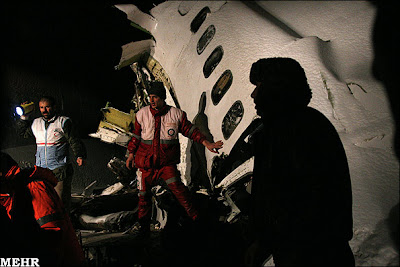 An Iran Air Boeing 727 crashed minutes prior to landing at Orumiyeh airport in northwestern Iran. 70 passengers were killed in the crash with 32 hospitalized. The flight, Iran Air 227, had taken off from Tehran earlier today. This is the fourth crash of a commercial aircraft in the country in the past 18 months.

UPDATE: Fars News Agency reports that 73 passengers have lost their lives and many are in critical conditions [Fars, 10 January]. Uskowi on Iran extends its deepest condolences to the families of the victims of this tragedy and to the Iran Air family.

UPDATE: The Boeing 727 that crashed in Orumiyeh on Sunday was involved in another mishap ten years ago. Then the plane nose-landed at Shiraz airport when its front landing gear could not open. This aircraft was first put in service by Iran Air in 1974 and has been banned to enter European airspace along with other older planes due to safety concerns.

R.I.P to all the victims. What a terrible tragedy. Hard to believe when you hear these stories that flying is still the safest form of transportation.

RIP to the victims of this preventable trajedy. The illegal US spare parts embargo on these 40 year old Boeing 737 is part of the problem Iranian commercial aviation faces. The sore loser US embargo is against international laws and air safety IATA requirements and contravenes basic principles of humanity.

The government needs to negotiate with China for rapid introduction of the C919 168 seat commercial jets.

Skilled Iranian engineers and excellent pilots deserve a lot of credit for keeping these museum pieces airborne despite all the impediments created by Iran's enemies.

Bad weather. Preliminary guess as to cause of crash is pilot error.

BTW: This is IranAir's first fatal accident since 1980. (Not counting USN shootdown of IR655.)

Hey Anon- you are an idiot. "illegal embargo"....for real? Can you remember the Iranian hostage crisis? What "International Law"? What do you know about the IATA? Don't get me started on "humanity".

Look, planes crash. period. Put away the political misguidings or go there and wrench on those old 727's all you want. If Iran wants new airplnes (read: SAFE airplanes) they are going to have to pony up the cash.

But I do agree, it is tragic and most likely entirely preventable.

this is few terrorist technition in iran make intire demage to iran air line they must look warry careful to stop them.

B727 was sure produced in 1970s because 1984 is the productionline stopped.
Iran Air will fly every old plasne, unil it falls from the sky.

Flying older planes is not the main problem. The average US fleet is around 20 years old as posted on their government website. The problem for Iranian aviation is the illegal spares embargo since 1979 as the US losers lost their Persian gas station to the Mullahs.

Iran has had difficulty obtaining aircraft with even with 10% US content since they are subject to embargo even Brazilian Embrear or European EADS. China may be the only hope but it has its own agenda and muddled policies. Russian commercial aviation is total crap and Aeroflot is itself flying on a wing and a prayer courtesy of vodka and chicken wire and is in much worse shape than Iranian aviation. Finding alternate planes and spares should be Iran's FIRST PRIORITY with oil hitting $100 a barrel money is not the issue. The Majlis should be debating this very serious public safety issue.

65% of Lufthansa Charter pilots are Iranians.

50% of UPS pilots are Iranians.

these sanctions are to kill Iranians and its instigated by the Israelis.
who the hell is Boeing, its AIPAC who holds their (Boeings)balls in their hands.

Here are some sobering facts:

The aging Boeing-727 plane which was already second-hand when sold to Iran 37 years ago, according to Iranian media broke into pieces when it crashed near the city of Orumiyeh after dark.
The crash is the latest to afflict Irans aging fleet of aircraft, much of it delivered before the 1979 Islamic revolution and hobbled ever since by poor maintenance and a shortage of new planes and American-made spare parts due to sanctions.
Iran has seen numerous high-profile crashes of civilian and military planes alike, despite Iranian attempts to keep aged aircraft flying. In the past, Iran has not been able to directly purchase new US-made Boeing aircraft, nor European-made Airbus planes because a significant portion of parts are American-made.
In 2002, transport chief said aging fleet at 'crisis point'

Senior officials have acknowledged that Irans safety record was suffering because of sanctions. In late 2002, speaking days after the crash of a Ukrainian-made plane killed 46 scientists, the then-transport chief said several Boeing and Airbus planes had been grounded for lack of parts, and Irans aging fleet had reached a crisis point.

Officials announced in August that they were replacing Soviet-designed Tupolev passenger planes with 13 Boeing and six Airbus planes purchased through a third party. The transport ministry announced that five of the Boeing jets had already arrived in Iran.

Fars also noted that Iran was boosting production on its own 52-seat, double turboprop aircraft called the Iran-140. The defense ministry was fully prepared to manufacture them once they received the order, Irans Defense Minister Brig. Gen. Ahmad Vahidi told Fars in October. Already by then, he said, Iran had manufactured seven of the planes.
Recent plane crashes in Iran

Sundays crash adds to a long list of incidents. In July 2009, a Caspian Airlines Tupolev bound for Armenia caught fire and crashed northeast of Tehran, killing all 168 on board.

In January 2008 an IranAir Fokker-100 experienced double engine failure on take-off in Tehran and burned on the tarmac.

In November 2006, a military plane crashed upon takeoff in Tehran, killing all 39 on board 30 of them Revolution Guard soldiers.

In December 2005, a US-made Iranian military C-130 plane ferrying journalists to military exercises crashed into a 10-story apartment block, killing all 94 on board and as many as 34 others.

And in the worst incident in Iranian aviation history, a February 2003 crash into mountains of southeast Iran of an Ilyushin-76 troop carrier with Revolutionary Guard passengers left all 302 dead.

He insisted Boeing to stop selling spare parts to Iran.

you don't agree,? then Prove me wrong.

Pahlavis "dabir-khane"receive their money (salaries) from the CIA and not by any Pahlavi dude.
Since they have no job or income, they claim to have been robbed by false friends, which is rubbish. They are actually robbing the US taxpayers, like Israel.

I don't think they have such muscles, but they inform the Israelis and anti Iranian groups in the US what hurts most in Iran and as such he is indirectly responsible for half the embargos including the air fleet.

this is few terrorist technition in iran make intire demage to iran air line they must look warry careful to stop them.