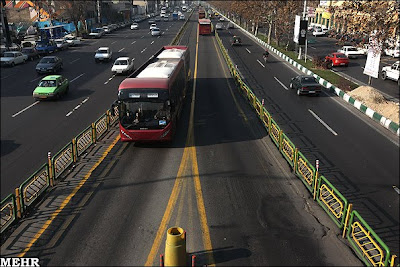 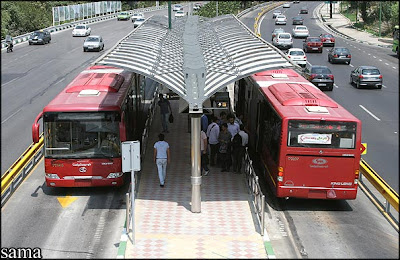 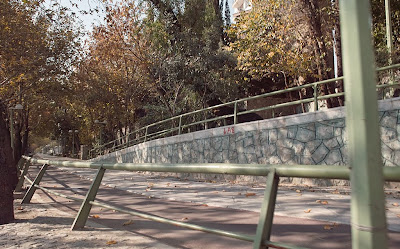 Sidewalk and Bicycle Lanes Next to Chamran Expressway, Tehran

The Iranian capital Tehran was named the third best city in the world in terms of transport system at the Sustainable Transport Award ceremony, which was held in Washington on Monday. The award, sponsored by Institute for Transportation and Development Policy (ITDP), was given to Tehran in recognition for its world-class public transport system, including a high-quality bus network which links with the city's rail network as well as wide tree-lined bicycle lanes. China’s Guangzhou received the top award, while Mexico’s Leon finished second. The ITDP is an international nonprofit organization that assists cities to reduce greenhouse gases and improve the quality of urban life.

"Today, in the metropolis of Tehran, despite all the obstacles and limitations, the development of the metro network, the Bus Rapid Transit system, and bus lines has been realized," Qalibaf said in his address.

Iran has few good and capable managers and Qalibaf is world class. Unforunately this regime does not allow him to attend a gathering abroad to express his views and share his experience. This is very sad. If such mayor was running a city like London, he would have been a very influential voice in the Country. However, in Iran the authorities don't simply care. I am surprised they let Qalibaf link through video-conferencing!

Let’s forget about the politics and honour the mayor of Tehran for doing a great job. It is a shame he was prevented or dissuaded from going to USA to pick up the well deserved prize.

I heard the representative of Iran was not allowed in the US to receive it, in order not to irritate the Jewish comunity.

qualibaf for the next president
as major of Tehran, either you are killed, jailed or become president

The representative of the city of Tehran, Alireza Dabir, did attend the Washington ceremony and accepted the award on behalf of Qalibaf and received standing ovation. It was not the ceremony that the Iranian government opposed, it was the mayor.

I agree with the comment that politics should be only a footnote here, and we should concentrate on the award itself. Congratulations to the mayor and the city's entire management team that work so hard for this great city.

This post has a lot of importance to the people…I hope you can continue to inspire and post more of this…Thanks Online Training!