Two different responses to civil unrest
by Mark Pyruz
There are distinct differences between the Iranian response to civil disorder in 2009 and the current Egyptian response now in progress. Below is a pictorial highlighting some of these differences.
click photos to enlarge 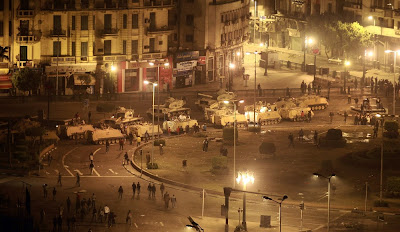 The Egyptian Army deploys on the streets of Cairo. Visible are elements of a mechanized force including M60 main battle tanks and M113 armored personnel carriers. In stark contrast to Iran's response which did not encompass a military mobilization and deployment, relying instead on Iran's law enforcement agency, NAJA. It's unclear as to the reason Egyptian authorities decided to withdraw their police forces and substitute the army. However, in the Iranian response, authorities never seemed to have doubted the reliability of NAJA and the self-perceived justness of their cause. Recent public opinion polling of ordinary Iranians also reflects majority support for their law enforcement efforts by a margin of 3:1, which may help explain Iran's confidence in NAJA. 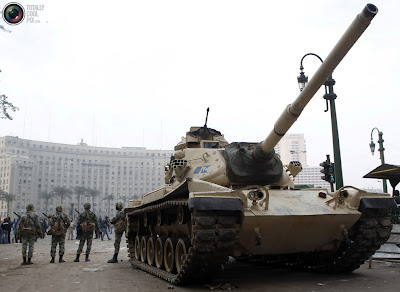 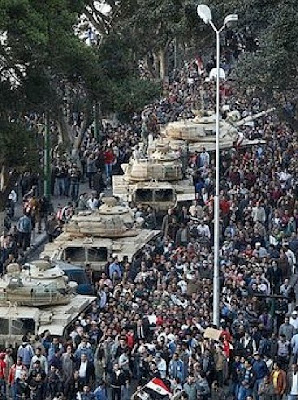 Egyptian M60s mobbed by protesters. Note the lack of perimeters established by any supporting infantry as a means of crowd control. 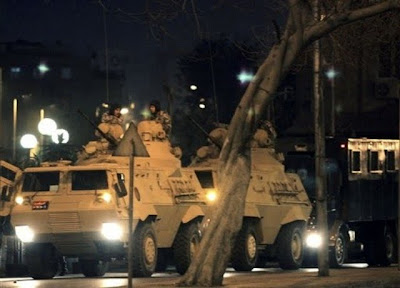 Egyptian Army Fahd IFVs deploy on the streets of Cairo. Unlike Egypt, Iran did not deploy military IFVs or APCs during the civil unrest following the 2009 election. 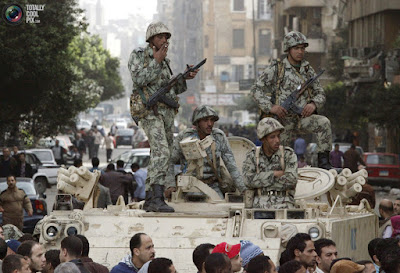 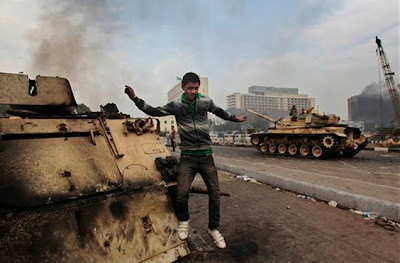 In the foreground an EA M113 APC, knocked out by protesters. In the background, an M60 whizzes by. 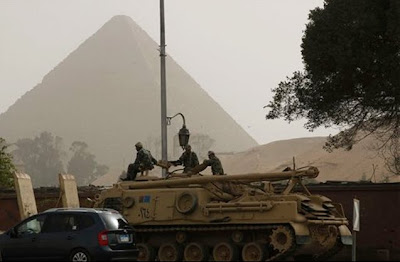 An Egyptian M88 armored recovery vehicle, to be used in situations depicted in the preceding photograph. 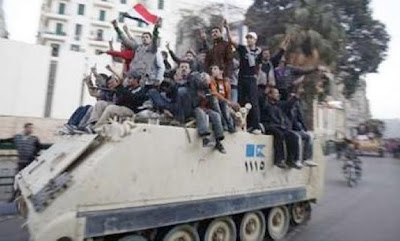 There are indications of a high level of fraternization occurring between protesters and elements of the Egyptian Army. This is reminiscent of the relationship that emerged between the Iranian Army and protesters in 1979, not 2009. 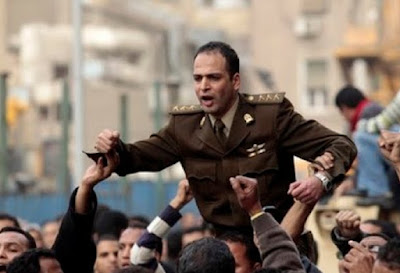 Here an Egyptian Captain is hoisted onto the shoulders of protesters on the streets of Cairo. In contrast, Iran's law enforcement remained for the most part motivated and attentive to duty during the period of unrest following the election.

Video:
A U.S. supplied M1 Abrams main battle tank heads an armored column at the the Rehab main gate in Cairo. This is indicative of the $35 billion dollars of military aid that has been provided by the U.S. to Egypt's ruling establishment to assist with maintaining itself in power.

Another big difference between the Egyptian and Iranian approaches to civil unrest: Here Egyptian law enforcement commits their armored water cannon vehicles (AWCVs) in efforts at crowd control. For their part, the Iranians did not appear to deploy their AWCVs following the 2009 election.

Good and factual analysis. Even the talking heads at CNN (much to the chagrin of Zionist Wolf Blitzer) acknowledged that Iran is a functioning democracy and the "green" losers were just sorry election losers without majority support. Iranian government is not a one-man dictatorship like Egypt but a pluralistic hybrid Islamic democracy and Iran is not a bankrupt aid dependent charity case like Egypt where the US controls the military and the kleptocrats..

The Egytian uprising and the response to it should be compared with that of the Iranian uprising of 1979. The current Iranian regime, although authoritarian and dictatorial in nature, still enjoys grass-root support. My guess is that the Moselm brotherhood will eventually prevail in the same way as the Mullas did in 1979 uprising.

PS. Anyone there sees a Barzargan in Mohammad ElBaradei?

The system will drag its feet hoping to take the staem OFF OF THE PROTESTS AND THEN COME UP WITH mOBARAKS RESIGNATION, SO AS TO DELIVER A MILESTONE KIND OF VICTORY TO THE PROTESTERS.

That way they hope to neutralize any further development of this protest and not allow an Iran like revolution.

West has learned a lot in the last 30 years

My brother lives in Cairo, and I've spent some time there myself.

I would note the following:

1) The Egyptian state has essentially collapsed - this did not happen in Iran at any time during the post-election protests. The standard institutions/bureaucracy of the "civil" state continued to function more or less normally.

2) Both sides in Iran were able to mobilise significant popular support in the forms of demos/counter-demos/set piece events; the Mubarak administration has been incapable of mobilising any grassroots Egyptian suppport whatosever.

3) Cairo/Egypt is experiencing an echo of the "Baghdad effect" ( the complete collapse of the state in April 2003 and its attendant looting/chaos ) - this never happened in Iran; throughout Cairo people are organising local neighbourhood watches to prevent looting/burglary/crime - I don't recall anything similar being reported in Iran.

4) During the post-election protests in 2009 all the various parties to the dispute were communicating their positions in the media, were constantly visible - ie there were top-level communications strategies being used to bolster/enhance their positions and there was a constant process of public engagement with various constituencies. The Mubarak regime, by contrast, appears to have nothing of any substance to say to the Egyptian people - it is completely disengaged.

The only form of communication being employed by the Egyptian "authorities" is the crude one of military symbolism - tanks in the streets, helicopters, and now jets, in the sky; there is a complete absence of any political discourse or discussion. The Mubarak regime has absolutely NOTHING to say to the people beyond comply or.....who knows what.

I'll reiterate an earlier point: the Egyptian state has collapsed; there are no civil institutions functioning, and it is possible that prior to Tuesday, the appearance of a state was in fact just a mirage.

Egyptians like Iranians are proud ancient people who have had it with a US installed corrupt respressive regime. Egypt is also a Muslim nation and its eventual government will have a Muslim flavour. The US/Zionists have again totally misjudged the mood in the Ara/Muslim street. The CS gas, M-60, Abrams and M-113 in the streets and the F-16 overhead are all made in the US that are being used to repress the Egyptian people. Shutting down Al-Jazeera or Press TV by the tottering Mobarek thugs is not going to turn-back the revolution.

The more the US shores up a dead corrupt puppet regime the more likely of an anti-US government in Egypt. The US is now seen as the prime source of repression around the Muslim world.

You are correct. The Muslim Brotherhood has just asked Dr. El-Baradei to negotiate with the US supported Egyptian military on behalf of the people. I think El-Baradei is stronger than Bazargan who did not have even a minor support base or political acumen. The Muslim Brotherhood and affiliated Islamic parties in Egypt and the Arab Maghreb are more organized than the factionalised Iranian political parties were in 1979 ranging from Tudeh (communists) to far-leftists who were already waging an armed campaign against the shah. In Egypt's case the people are simply fed up by a US supported facist police state kleptocracy that has brutalized the Egyptians. The US has been running CIA torture centres in Egypt just like they did in Iran with SAVAK and MOSSAD.

Mobarek's Mukhbarat (Secret Police) is as thuggish as SAVAK and uses the same tactics including letting loose thugs and looters in the streets. The Egyptian military is not as professional and it will be interesting to see how the US manipulates the corrupt generals to repress the population. The end result will be an anti-US revolution the longer the repression with US blessing continues. The intimidation tactics used by the Egyptain army are the same as used by the Zionists including making low level airforce passes with F-16's on crowds breaking the sound barrier. This idiotic intimidation may work over enslaved and imprisoned Gazans but will not work in Cairo or Alexandria.

Irans protests were limited to 4 or 5 uptown districts in Tehran.In a city with almost 10 million that seems a lot, but Tehran has 20 something districts which makes the whole thing a realtiv issue.

I would know, I was there, and I voted Moussavi, but his actions after that and not accepting the defeat, put me off.

The Iranian people, to their great credit, initiated what was overwhelming a classic non-violent, principled protest movement against the radical regime.

That said, What started out as a genuine and positive pro-freedom movement is being steadily coopted by the Muslim Brotherhood and other violent and extremist forces. There is now a growing risk that the overthrow of the Mubarak regime could lead either to an authoritarian military regime, or a Radical Islamist regime.

We must pray neither scenario comes to pass. The people of Egypt would be further oppressed.

Jihad is not the way, we need more freedom, more openness, more protection of human rights and civil rights, free elections, free markets, and the creation of full-blown democracies.

I do believe Mubarak has stayed too long. He has not responded to the yearning of the Egyptian people to be free. His day is coming to an end.

For all of Mubarak's sins, he is not a Radical. He doesn't want to launch a jihad against the U.S., Israel or the West. He has maintained the peace treaty with Israel. He has worked to counter the Hamas movement in Gaza. He is strongly opposed to the Iranian nuclear weapons program and has worked closely with the West to counter it.

I am praying that the Lord would be merciful to the people of Egypt, and that He would give wisdom to Mr. Mubarak and his senior advisors.

Ultimately the Lord is in charge.

Mobarek is a disgraceful puppet of the Zionists and his end is near. Get over it.

Update: Al Jazeera reports Mubarak’s planning exile to Tel Aviv. According to sources in the Egyptian Embassy in Tel Aviv, Israel is making preparations to welcome Hosni Mubarak into exile after Saudi Arabia rejected overtures. Al Jazeera also reports Israeli diplomats have fled Egypt amid the unrest. CNN reports widespread rumors that Mubarak’s wife and other family members have already fled Egypt.
A Former CIA Analyst says it is very much possible that Egyptian President Hosni Mubarak will ask Israel to help him out of the mess he is in. Ray McGovern said "I would not exclude the possibility that Mubarak enlist Israeli help to assist him to hang on to power."

McGovern says Israel could help Mubarak with the newly appointed Vice President Omar Suleiman's takeover and "repress the protests in the country."

Egypt's Hosni Mubarak appointed Omar Suleiman, the country's spy chief as the next vice-president on Saturday.

The former CIA analyst called Suleiman "poison to the people who are demanding their rights." McGovern stressed that Suleiman's reputation is "incredibly harsh" as head of the Egyptian spy agency.

McGovern says Israel is threatened "as never before" by the Egyptian people's call for change. He says Tel Aviv is worried that the movement in Egypt could be "contagious enough to spread to Israel's neighboring countries," like Jordan where people are being repressed.

McGovern concluded by adding that he "would not put it past Mubarak to appeal for help from other repressive leaders in the region."

The hasbara bloggers are getting nervous as the Zionist evil in the region is coming to an end.