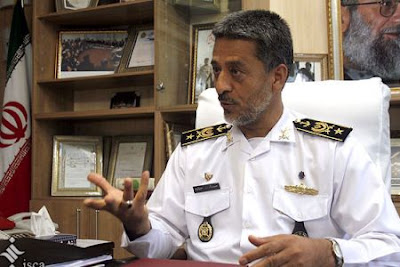 Iran’s Navy Commander Rear Admiral Habibollah Sayarri announced in Tehran that he would lead a delegation of senior Iranian naval officers on a visit to Djibouti next month. The delegation will meet with Djibouti Chief of General Staff Gen. Fathi Ahmad Hossein and Navy Commander Adm. Abdulrahman Aden Cher. Several military memoranda of understanding would also be signed between the two countries during the visit.

Iran's navy is still a Persian Gulf centered coast guard and is in dire need of modern surface vessels at least in the frigate class and submarines. Iran should be buying at least the Chinese 053H (Jianghu-I) type 1500 ton displacement range frigates that can handle extended blue water operations. If the Chinese are not that reliable partners then North Korean military ship building and armament is more than adequate along with technology transfer. Iran is building quite decent commercial ships and tankers so local manufacture of Frigate class ships armed with local SSM's (C-802and C 803)should be quite possible. The Jamaran and the almost completed Velayet are good intial efforts but Iran needs at least 50 major surface combattants to be taken seriously as a blue water navy. Less talk and more action from the government.

The IRIN is moving to the gulf of oman and arabian sea, the irgc will be the only force in the persian gulf... though it is clear the IRIN lack modern vessels will sanctions allow the sell of frigates to iran?
Oh and for what it's worth the navy has announced it will build frigates..
press tv