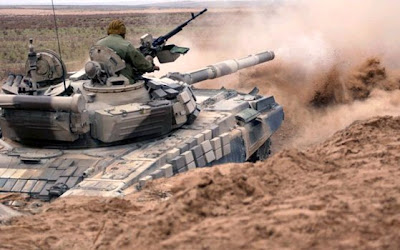 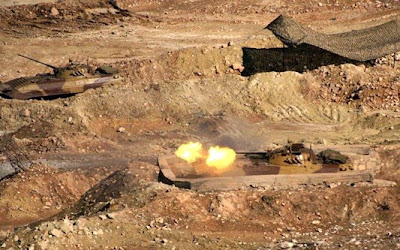 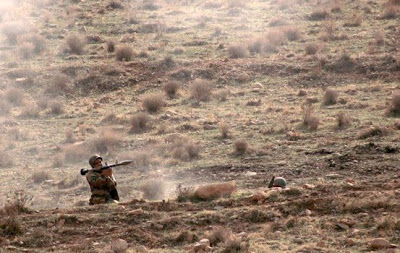 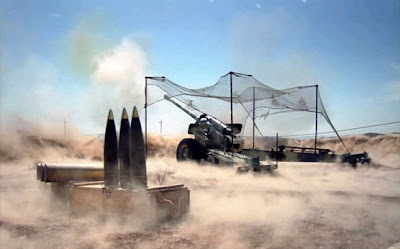 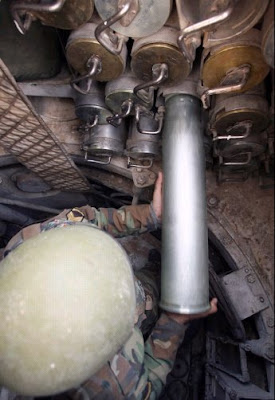 Ali ibn Abi Talib Maneuvers. Iranian Army. 28 June - 1 July 2009
Photos: IRNA
The Iranian Army ("Artesh") conducted large scale maneuvers between 28 June to 1 July in the provinces of Khozestan, Ilam and Lorestan. The three-day drill was to test the command and control readiness of the Army. New telecommunications, information processing and electronic warfare systems were also tested. The Iranian military is drilling different war tactics for future combats with several scenarios on possible attack on the country.
Posted by Nader Uskowi at 5:49 PM

did any fighter aircraft take part in this drill?

Not fighters. Helicopters were used in the drill. Two weeks ago, IRIAF conducted a three-day aerial maneuver, Milad-Nour-Velayat, over the Persian Gulf. F-4 and F-5 Saeqeh fighters took part in that maneuver.

Not fighters. Helicopters were used in the drill. Two weeks ago, IRIAF conducted a three-day aerial maneuver, Milad-Nour-Velayat, over the Persian Gulf. F-4 and F-5 and Saeqeh fighters took part in that maneuver.

So where is all the problems, violence and hate coming form out of Iran? Is it perhaps coming from there wicked governmental regime that has taken control of Iran and its military?That is holding the Iranian people hostage and oppressing them with fear tactics and acting like they are doing Gods will and anyone who isnt with them or doesnt agree with them is sinning and must repent and ask God for forgiveness?So there words and actions show us the truth and how about them they are acting sinfully against Gods will not for it?They say Our way is Gods will and if you dont go along with our way you are sinning?Thats crazy to be that way its unacceptable its sinful.They are full of b.s.To have that kind of leadership that is really doing evil wicked things aiding terrorist groups oppressing there own people not following there own constitution ignoreing the votes of there people in a election.to say they are doing Gods will is a sin in its self and they need to repent and ask God for foregivness.Have they made a pack with the devil?I dont know why the Iranian people hasnt kicked those hypocritcs out of office along time ago, why do they put up with them?It makes all of Iran and the Iranian people look bad to the world.The military is only following orders from there government leadership.Perhaps there military should help there fellow Iranians and overthrow there government and have a coue/revolution etc.to force a change of governmental leadership,including a new supreme leader and president that is truelly holy spiritual leader and a true in there Faith Islam/Koran.The religion of Islam/Koran is one of godliness/holliness/peace not ungodliness/wickedness.war/violence with your own people and the world.But I see it now whats going on and if it was up to me I would replace all Iranian governmental officals and the supreme leader and the president and start over with a fresh start and truely go with Gods will and be holly and at peace at home and abroad. Be strong,Have Faith, God is not mocked.Praise God our creator.For without Him none of us would even be here at all.God will judge the wicked for there crimes while they lived they wont escape the judgement,there time is short.The devil has blinded there eyes to the truth they are deceived so they are not in Gods will but the evil ones.
Faith/Hope/Love the greatest of these is Love. Shalom: Thomas

Get a grip. This thread is about Iranian military not religious babble. Iran is doing just fine. Thank you.

Thomas
They had pro-USA dictators and they know what was look like,if they don't like own govermant they will replace them with another one same wave they was do in'79 but problem is that Iranian like they gov. but you, USA and other country pupet of USA don't like and you love to play god,you think all of world is your and you have every right to change regime all over the world,but this time it's not some banana-country like other,it is country with big economy and strong military with tehnology level bigger than some EU country where people isn't stupid.I must say this,Izrael people must realize that is only way to live in peace is that they self began respect other and they must change politics of war
crminal,if they realize that peace don't came on the wings of war it will be better for all.