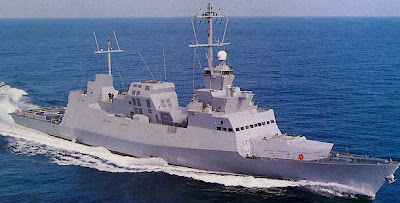 Israel's Eliat Class Saar Five
Two frigates have passed through the Suez Canal
Israeli defense officials have told Times of London today that Israel's recent deployment of warships across the Red Sea should be seen as serious preparation for an attack on Iran.

"This is preparation that should be taken seriously. Israel is investing time in preparing itself for the complexity of an attack on Iran. These maneuvers are a message to Iran that Israel will follow up on its threats," the official was quoted as saying.

Two Israeli Eliat class Saar Five missile warships and a Dolphin class submarine capable of launching a nuclear missile strike have sailed through the Suez Canal in the past ten days in preparation for a possible attack on Iran’s nuclear facilities, The Times reported.

There were unconfirmed reports that units of Sayeret Matkal, Israel’s Special Forces, have also been transferred to a mock training facility near Eliat in preparation of an eventual attack on Iran’s nuclear facilities.
Posted by Nader Uskowi at 8:38 AM

Email ThisBlogThis!Share to TwitterShare to FacebookShare to Pinterest
Labels: attack on Iran, Israel

Only two frigates and one submarine? PFFFT!!

Iran's navy (three Kilo class submarines and dozens of midget submarines and missile-equipped fast attack crafts) will wipe the floor with the Israeli navy any day of the week.