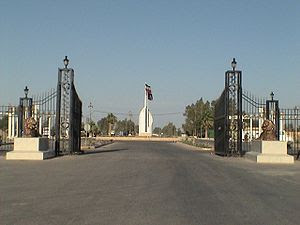 Seven Iranian dissidents have been killed at Camp Ashraf, 60 kilometers north of Baghdad, during a surprise raid by Iraqi military and security forces on Tuesday. The camp, in Diyala Province, is run by the Iranian opposition group Mujahideen Khalq Organization (MKO). Iraqi forces have surrounded the camp and clashes are continuing for a second day. The camp is home to some 3,000 MKO members.

Commander of US forces in Iraq, GEN Ray Odierno, said in Baghdad that the US had not been forewarned of the raid. After Saddam’s fall, the camp came under US control and was disarmed. Last month, the US relegated the control of the camp to Iraqi military. GEN Odierno told reporters last night that the Iraqis had promised at the time that they would treat the exiled Iranians humanely.

My suspicion is that we knew that the GoI would be looking to do something like this in order to smooth over relations with Iran. Therefore, that was why we did not remove MEK from the State Dept's Foreign Terror Organization list back in January. Had we removed them from the list, then this little operation would be even more awkward for us.

Are we using MEK as a sacrificial lamb? Or am I trying to connect too many dots?

The MEK have been used as a bargaining chip and a sacrificial lamb.

if the US abided by law and justice, the MEK would never have been placed on the terror list in the first place. they should have been removed a long time ago. the EU and UK senior courts rule that the terror listing was perverse and unjust.