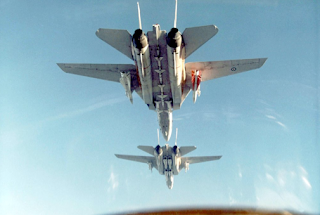 The initial plan of Project Sky Hawk was to successfully mount and accurately fire a MIM-23 I-HAWK round in the place of the dwindling stocks of the American made AIM-54 Phoenix missile.

The I-HAWK is a SAM (Surface to Air Missile) so marrying it up with the F-14 was going to be a difficult task for Iranian technicians.

It was eventually discontinued, a similar idea was done with the testing of Sedjil missile on the F-14 during the 1990's a few years after the war had ended.
Posted by Paul Iddon at 7:32 PM