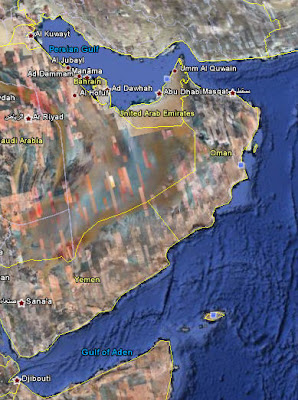 From Persian Gulf to Gulf of Aden
Google Earth

RDML Qolam Reza Khadem Biqam, the acting commander of Iranian Navy, told reporters in Tehran today that Iran has deployed two new warships to the Gulf of Aden to protect and escort Iranian oil tankers and merchant ships against the pirates. Iran had previously sent two other warships to the area. Those warships will now be replaced by the new ships. The Navy commanders did not disclose class of warships deployed to the Gulf of Aden.
Posted by Nader Uskowi at 10:17 PM