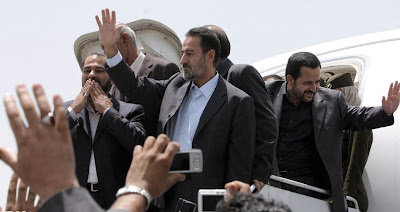 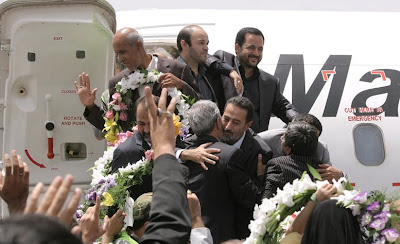 IRNA Photos
Five Iranians held in Iraq by the United States arrived in Tehran today and were greeted as heroes. The five were detained in Irbil, a city in Iraq's Kurdish region, on January 11, 2007.
The US military said the men seized in Irbil had been thought to be connected to Iran's IRGC Quds Force, accused of providing funds, weapons, roadside bomb technology and insurgent training.
The Iranian government holds US responsible for kidnapping and detaining of these diplomats in Irbil.
Posted by Nader Uskowi at 2:10 PM

The US Govt. ought to be sued heavily, everyone of them was there at the behest of the Iraqi foreign ministry but when you have a Pres. like Bush and VP like Cheney then thats what you get.

valid point, it took Obama long enough to free them as well though!