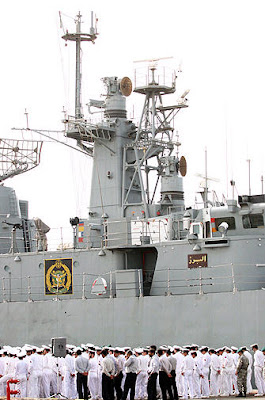 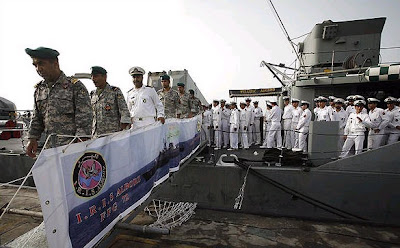 IRIN Alborz Returning from Aden
Bandar Abbas. 7 July 2009. Mehr Photo
IRIN frigate Alborz returned to Bandar Abbas today after patrolling the waters off Gulf of Aden. The British-made frigate, commissioned in 1971, was deployed to Aden to protect Iranian oil tankers and merchant ships against the pirates. The frigate became the first IRIN ship to take part in naval operation in international waters. Accompanying Alborz, was IRIN Busheher which also returned to its port of Badar Abbas today.

IRIN has deployed two more ships from their home port of Jask to Gulf of Aden. The IRIN Naghdi, a US-made patrol frigate commissioned in 1964, and IRIN Bandar Abbas.
Posted by Nader Uskowi at 8:17 AM

I dont think you have the right to crop out the pictures with mehr news watermark below of it!

We have given Mehr News Agency full credit for the photo.