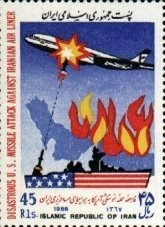 Iran is remembering victims of Iran Air A300 Airbus shot down by the US over the Persian Gulf on 3 July 1988, just a month before the end of Iran-Iraq war. 290 Iranians lost their lives during the attack by USS Vincennes on the civilian airliner.

Shameful act of US cowardice. God Bless Iran and the families of Captain Mohsen Rezaian and the innocent passengers, mostly women, children and babies. This has to be one of the most horrific war crimes in human history. This savagery was committed to support the US puppet Saddam as after the Basra and Fao offensives Iraq was on the verge of collapse.US aim was to demoralize Iran by committing this horrendous atrocity against civilians. The idiot mass murderer Capt. Will Rogers of the Vincennes was given a medal for committing genocide of Iranians.

There are so many things wrong with the USN account, including the fact that the F-14 (which they say they mistook the aircraft for) is not an attack aircraft, and the airliner was ascending not descending (as the crew initially alleged).

Those hotdogs on the Vincennes were hell bent on downing an Iranian plane, plain and simple. The fact that it was a civilian airliner was just a "oops" moment, for which the crew was later decorated for "bravery".

the last Anonymous has it spot on

not only were the crew given medals for shooting down an airliner full of civilians but then Vice President George HW. Bush came out and stated:

"I'll never apologize for the United States of America. Ever, I don't care what the facts are."

we know you don't George!

It is rather unfortunate that 22 years have passed since the downing of Iran Air Flight 655 by the USS Vincennes but the United Nations, especially its affiliate the International War Crimes Tribunal, has practically done nothing to put the criminals in the dock. The souls of the 298 martyrs, who found a watery grave in the Persian Gulf, off the Iranian island of Hengam, because of Washington’s blatant act of state terrorism against the Islamic Republic of Iran – and that too after illegally entering Iranian territorial waters – are craving for justice. July 3rd remains a permanent blot on the dark and blood-stained human rights violation record of history’s most evil state.

When will Uncle Sam, whose detested effigy goes up in flames with frequency all over the world, will be formally grilled and handed the deserving punishment for its well documented crimes against mankind? Why do the Americans and their minions love the shedding of human blood?

I think Iran should do what Israel does. Find the ones responsible for shooting down the passanger airlines. Offer them justice on the spot or trial in Iran. Most of these criminals are in 70s and retired. Probably womdering around the world. Easy to track and bring them to Iran. I am sure Quds force can do a good job on these mass murderers especially the Captain.

Guys I am off topic on this but I am surprised about the fact that there is no posting on Iran's alleged delivery of Radar system to Syria. Does anyone know the origin make of this radar? Is this Iranian made. In general how good are Iranian made radars?

Captain Will Rogers III was the Captain and he was decorated by Reagan afterwards and sent into retirement.

Anon 3:29, I'm holding off on this until I can get more information. So far, all I have is a vague AFP report using a file video of a PAR from a MIM-23 type SAM system. That doesn't fit the narrative of a serious upgrade.

Furthermore, Syria's present SAM coverage is already, in certain respects, superior to that of Iran's.

Until there's more specifics, and a more plausible advantage pointed out to such a transfer, it's impossible to properly confirm and analyze such a story.

Mark, to the best of my understanding Iran was producing phased array radars since 2007 and also has at least a dozen Kolchuga passive tracking sytems. Syrian technical capability is not that sophisticated. Iranians have been ugrading their air-defenses since 2007 Zionist strike at the under-constrution "nuclear facility" in western Syria. Iran also has monitoring stations in the Chouf mountains in Lebanon.

The hi-tech system has been designed and produced by SA-Iran Industries affiliated to the Defense Ministry.

SA-Iran, which has been studying the project for several years, said that the system is capable of tracing various types of flying objects and missiles to very high altitudes, helping the country's high-precision military devices to target flying objects at different altitudes.

The technological advancement was achieved following the success of Iranian experts in designing and manufacturing parts with fuzzy structures an area of hi-tech mastered by very few countries in the world.
note from Iranian-Shi'ite: "fuzzy structures" (aryahaye fazi) might be better translated as "phased array."

Following the said stride, Iran could accomplish a key chain of knowledge and is not capable of providing for all its needs to RADAR systems and devices.

I've seen the reports of Iranian upgrades, as well as some of the upgrades in photos. But I haven't yet seen anything detailed for this specific story.

Even the FARS report is, itself, vague. (I think it's originally from 2007)

This latest report could very well be another "Scud transfer to Lebanon" story. We need more to go on, otherwise we're engaging in conjecture at this point. Of course, engaging in conjecture, we might be tempted to point at one of the following (Iranian sourced from Jangadfzar Magazine, listed at ACIG.org):

4. GAMMA-DE and -SIE:
Phase array. Can detect small targets from 240 km. Comparable with Lockhid Martin radars in Negev Desert Israel. Can be jointed with S300 MPU and S400 systems. Delivered after 2007 and continues thereafter.

5. Unlicensed production of RESONANCE radars. Range more than 1000 km specified for stealth targets. Confirmed without naming only mentioning range and some characteristics by IRIADF commander. Probably near Mashad/TFB.14.

7. VEGA system covering more than 80% of iranian airspace and effective against EW aircrafts and SEAD missions.

So take your pick, or pick one that's not listed! But realize your exercise may only be contributing to PR and media hype, for war against the Islamic Republic of Iran.

I think most iranians never forgive that.

I am sure,soon Iran will be in the situation to claim for justice.

Thanks Mark and others for detailed radar explanation. Do these mean that Iran oporates an integrated radar system as opposed to point defence radar system?

On the subject of Syrian plants being bombed by Israel, I recall reading that Iran was very upset by Syrian reaction. I too believe that without Iranian technical help neither Syria or Lebanon/Hisbollah will not be able to operate these technologies efficiently. Syria's performance on every single front has been dismal. Actually I believe this meshes well with the performance of other Arab armies (including Egypt, Jordan and Iraq). None of them have offered anything credible against Israel. If it comes to early warning systems, Iran has to take control of these outsourced systems.

The planes came from Baghdad airport and not from Israel.

I tend to agree that radar technology or integration is NOT Iran's weakest link (see my comment
under Uskowi article "Iran S-300 Type Launcher and Radar Variants"), but mobile (liquid fueled) long-range (jet-vaned) AA missiles.
See this article
http://en.rian.ru/world/20100702/159658403.html
which, curiously enough, appeared *AFTER* my comment.

..."liquid fueled" must be "solid fueled" of course.