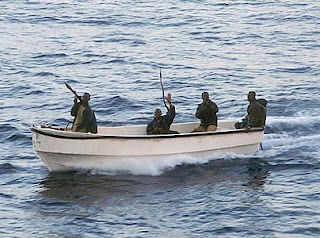 A 158,000-ton Iranian Sousangerd ship carrying crude oil to Spain has escaped an attack by ten Somali pirates who attempted to hijack the ship in the Bab al-Mandeb strait in the Gulf of Aden according to a National Iranian Tanker Company (NITC) official [Press TV 11/07/2010].

This was the fourth attempt by Somali pirates to hijack an Iranian ship in the region this year, the previous three of which were also unsuccessful.
Posted by Paul Iddon at 11:57 AM

You mean Zionist agents? AS the old expression used to say "Reds under every bed", so the new says Zionist under every crime!

Looks like the pirates picked on the wrong guys and had to flee the Iranians. Apparently the Sepah now mans many of the tankers. Moral of this story is DON'T MESS WITH IRAN.