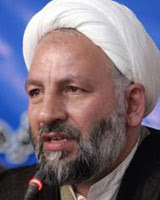 Hojattoleslam Mohammad Nasser Saghay Biria, President Ahmadinejad’s Advisor on Religious Affairs, has resigned his post in what his close associates are describing as a protest against Ahmadinejad’s alleged un-Islamic views on requirements for women to wear veil and conform to strict Islamic dress code. Ahmadinejad has not yet accepted Saghay’s resignation.

Contrary to popular belief, Ahmadinejad is quite progressive in his personal interpretation of Islam and is not as dogmatic as the Qom clergy. He is an ultra-nationalist, but not a fundementalist by any stretch of the imagination. Actually, Newsweek a few months ago did quite a surprsingly objective piece on his presidency.

In a country where obedience to the ayatollahs is expected, Iran's president is finding another way.

The Newsweek piece is quite interesting. One analytical problem, however. It divides the conservative camps into Ahmadinejad v. the clergy. It’s best to see the spectrum in the shades of fundamentalism instead. Kayhan’s Shariatmadari, referred to in this post, is not a cleric, yet he is the spokesman for the ultra fundamentalists, as far rightist as anyone in the country. Ahmadinejad was referring to Shariatmadari as his nemesis.

Ahmadinejad and people like IRGC’s Jafari are not clergy’s boys. If anything they represent a “baathist” tendency within the establishment, more secular, yet extremely reactionary and militaristic.

The Abadgaran (Developers of the Islamic Revolution) faction is indeed more militaristic and these "reformist hawks" formed their bonds on the bloody battlefields of the Iraq-Iraq war. They are more inclined to take their inspiration from Mesbeh Yazdi. They are positioning themselves for a post-Khamenei era. The IRGC and Basij influence is quite pervasive in Iranian society now, and more the western pressure the easier to promote the Abadgaran nationalistic agenda.

Best news from Iran in weeks.

Push these pseudo-talibans out of the executive and bring up the war generation.

Many of the Westernized Iranians might not believe (however irrelevant) but those in power now, are quite against "Mullaism"

Nahid is correct. Considering the high educational rates, political awareness and active civic society in Iran, the pure theocratic rule of the mullahs is at a fading end. Iran is being increasingly run by the new generation of technocrats and ultra-nationalists. I believe a hybrid political reformation within the IRI is on the cards. It will be an evolution and not the "regime change" revolution so wishfully desired by the US/Zionist axis and Iran's enemies.

Iran is moving from a bazaar society to an industrial economy. History shows that the workers will demand freedom exactly how the industrial west economy did. Workers of the world unite!

be soft to the own people
be though to the aliens.

That is Ahmadi nejad politik

After about two and a half years during which the danger of war between the United States and Iran was at a relatively low level, this threat is now rapidly increasing. A pattern of political and diplomatic events, military deployments, and media chatter now indicates that Anglo-American ruling circles, acting through the troubled Obama administration, are currently gearing up for a campaign of bombing against Iran, combined with special forces incursions designed to stir up rebellions among the non-Persian nationalities of the Islamic Republic. Naturally, the probability of a new fake Gulf of Tonkin incident or false flag terror attack staged by the Anglo-American war party and attributed to Iran or its proxies is also growing rapidly.

I found this post while looking for song lyrics. Thanks for sharing will be sure to follow this blog regularly. Great article it very informative have a nice day.