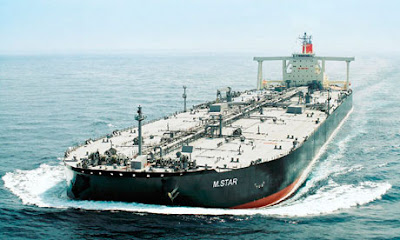 The Japanese M Star tanker, which was carrying approximately 2.3 million barrels of crude, was damaged in an explosion near the Strait of Hormuz at the mouth of the Persian Gulf. The owners, Mitsui O.S.K. Lines, said the explosion could have been a terrorist attack on the tanker.

“We believe it’s highly likely an attack. There is nothing that can explode in that part of the vessel,” Mitsui spokesman Eiko Mizuno said [AP, 28 July].

The incident caused no oil leak and the vessel is heading toward UAE port of Fujairah on its own power.

UPDATE (29 July): The tanker arrived at Fujairah on Wednesday evening. The tanker bore no sign of external attack. Investigation was underway to establish the cause of the incident.

This seems like some sort of psy-ops disinformation and has been refuted by most global media even. Even the BBC is not running this "news" and Japan has categorically denied any such incidence. I believe we will be hearing a lot more of such "news' in the future as the "sanctions" fail to bite.

The news of the blast was first reported by the Iranian authorities. Please see the update to the post. The director of shipping at Iran's Hormuzgan province reported that a fire onboard was caused by a blast. The director of Iran Shipping Organization ruled out any terrorist attack but attributed the blast to inflammable gases and vapors in oil tankers. Iran's Fars and Mehr news agencies ran those stories.

There is a tense atmosphere in the region, but that does not mean that reporting of an incident like this is psyop disinformation. In this case, unless the Iranian officials wanted to make up the story for any alternative motives, there was a blast on an oil tanker at the Strait of Hormuz which regardless of its cause made it newsworthy.