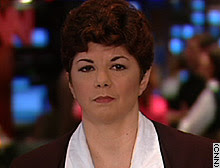 Hezbollah's spokesman Ibrahim Moussawi has criticized CNN for firing senior editor Octavia Nasr after she expressed remorse following the death of Ayatollah Mohammad Hussein Fadlallah in on her Twitter page where she stated:

"Sad to hear of the passing of Sayyed Mohammad Hussein Fadlallah.. One of Hezbollah's giants I respect a lot..."

"This measure reveals the double standard in the West regarding matters in the region and unmasks the United States, which pretends to protect freedom of speech."

After nearly two decades working for CNN she was fired under the pretext that her credibility had been lost.

A UK envoy has also angered Israel over stating that Fadlallah was a "decent" man and her "favorite politician".

An Israeli spokesmen has stated that Ayatollah Fadlallah was "unworthy of praise."

Fadlallah who was a strong supporter of the Islamic Revolution and also for the founding of Hezbollah in 1982 as a result of the Israeli invasion and occupation of the South of Lebanon, Hezbollah fought an 18 year war with Israel until a cease fire was reached in 2000 and then fought another short war in 2006 after an attack on Israeli soldiers in a Lebanese territory occupied by Israel called the Shebba Farms.

These two 'incidents' follow Helen Thomas' early retirement as a result of criticizing Israel's attack on an aid flotilla full of peace activists in which she stated in the heat of the moment that the Jews should get out of occupied Palestine.
Posted by Paul Iddon at 11:35 AM

The gall of the Zionists and their US puppets to suppress the TRUTH is amazing. They commit the worst atrocities and can not even tolerate a eulogy for a Muslim religious leader. This type of fascism will be their undoing. All totalitarian systems collapse due to censorship and restrictions on open discussion and freedom of speech. The Zionists think they can hide under a rug and suppress the daily atrocities in Palestine and Lebanon. Evil only lasts a short dark while and then goodness takes over.

This is why I cherish Mr or Mrs Anonymous.

Why do we pretend to be surprised.

This kind of hypocracy and injustice is everywhere and a fact of life.

Make sure to stay anonymous, even if you are a big shot somewhere.Reserve your intelligence and sting when it matters.

Whole Zionist agenda is stealth, like their 911 False Flag to instigate a "clash of civilizations" so they could profit from it. However, the Zionist agenda is backfiring bigtime due to global resistance to the ponzi schemes and endless wars while US economy is ruined.

The difference between US (Western) democracy and real Authentic democracy is;

In the US, (West) you can demonstrate and declare whatever you want.... but the system is also free to black list or red list anyone or "you" for the rest of your life.

As a student learn to speak anonymous, so as to get the job you want when you are looking for one later in life.

Rest assured, every online statement and every demonstration has been taped and archived and photographed by the NSA,FBI and HLS.

Don't you dare call me paranoid.

I agree with all the statements.

The hypocracy is there and instead of fighting against it, make use of it to your own benefit.

Just as many pretend to agree with Israel's politics to survive and promote themselves and careers. Privately they burn the David star to get a balance.

Best example is Hollywood, everyone must prove one or two drop of jewish blood to be considered A listed, or at least getting through the door .

A shia is allowed to pretend to help promote the agenda.

So go get it tigers,

I heard the daughter of Hadi Khorsandy (she is editor in chief by CNN) actually fired her.

A couple of renowned victims of western Berufsverbote:

In both Octavia’s and Helen’s statements it was brevity that cost them public opinion and their jobs. The internet has nurtured the reactionary side of our natures, we are quick to judge and slow to listen to long reasoned arguments.

As Octavia put it: “Not the kind of life to be commenting about in a brief tweet. It's something I deeply regret.” In the long blog format she was able to clarify what she intended: “Fadlallah took a contrarian and pioneering stand among Shia clerics on woman's rights. He called for the abolition of the tribal system of "honor killing”… He warned Muslim men that abuse of women was against Islam.”
She also states: “This does not mean I respected him for what else he did or said. Far from it.”

Public opinion was too persuaded by the reaction to her short tweet to be interested in her long and reasoned blog post, and so firing her was in CNN's financial interest.

Helen’s short miss-statement was similar, she got caught in agreeing to the short phrase “So you're saying the Jews go back to Poland and Germany?”

You guys realize that Nasr's boss at CNN was an Iranian-American woman, who then preceded to fire her, right?

Beyond that, I have know idea why any of you even care about this. Since when did Palestinians and Arabs become more important than caring for your own people?

It is amazing the similarity between modern Iranians and modern Americans.

Aren't you the least bit embarrassed? Or has religion eaten up any sense of identity or culture?