Iran Air in Search of Fuel 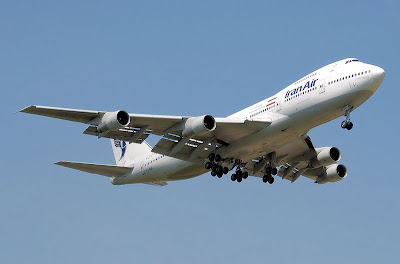 The Washington Post reports today that Iran Air, the national Iranian airlines, has become unable to refuel its planes in most of European airports. Under the new EU sanctions, several major oil companies have cancelled their jet fuel delivery contracts with Iran Air. The list includes BP, Shell and Q8.

Please please please put a reference, web link, something, at the end of your posts! Where did you get this story, EXACTLY?

that is true, The Iran Air has problem for Refuleing of plae in Europe.
but Who cares ?
Europe is not very important for iran.
just wait a while, they will again sell Creosin to iran air.

that is some interesting news
France is going out of fuel.
no fly more to Paris
the refineries are on strike since 5-6 days

Not too much to ask I think.

It will be interesting to see if this problem truly comes to pass in a few months if Iran Air will transfer some of its routes to Mahan Air an airline that has more planes ready to fly to Europe and offers better service than Iran Air. It recently bought around 13 airbus planes from Lufthansa and can quickly fill in the gap by Iran Air. That all being said, even though Mahan Air is a private airline it too could come under pressure in the future as the the US and Europe do not seem to be keeping to their word of not targeting civilians. The no plane and parts rule is a perfect example where the US has directly targeted the safety, security, and availability at all of Iranians to travel without having the fear of perishing. There are plans to go to the Hague Court on this matter as travel is a basic human right of all peoples. I encourage the Iranian government to follow through with this and urge us all as a civilized people regardless of our politics to protest in any way we can this discriminatory and human rights violation.

Thanks Amir, my thoughts exactly. What happened to the pledge not to target civilians through sanctions? The West, reliably unreliable till the end. See how they've tried to demonize Turkey, if they do that to a NATO state and ally, and a key energy hub, what will they do to Iran? Turkey's place is the dog house, Iran's the sh*thouse.

what is happening in France is somehow a form of Poetic Justice, with every plane going there carrying its fuel with it.