Iran & Iraq: The Search for the Missing 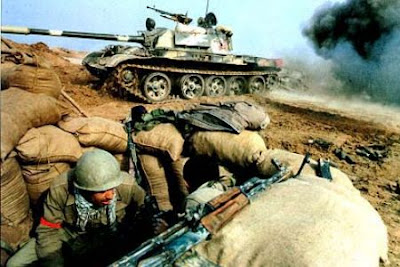 Iran and Iraq have held talks on the fate of soldiers and civilians still missing since the end of their eight-year war in 1989. The International Committee of the Red Cross (ICRC) will support the efforts to expedite the long-stalled search for the missing from both sides.

"Over 20 years have passed since the war ended, and tens of thousands of Iranian and Iraqi families still do not know what happened to their missing loved ones," Eric Marclay, ICRC’s deputy chief of operations for the Middle East, said on Thursday [AFP, 28 October].

"We very much welcome the progress achieved, and the commitment and determination of the authorities on both sides," Marclay added.

Nearly a million people were killed in the war, with thousands soldiers and civilians still missing. The two countries insist that they no longer have prisoners of war.

The in Iraq stationed MKO terror group is responsible for the disappearance of at least 10,000 Iranian POW's

Get into Camp Ashraf and slap them into revealing where their mss graves are.

God Bless Iran and all Iranians except the fifth column MKO.

I would agree with Illuminati's comment. The Rajavi terorists hired by crazy Saddam thugs were indeed responsible for some of the worst atrocities against Iranian POWS at Camp Ashraf and other torture centers, including the torture and execution of many members of the Iranian armed forces, particularly pilots and senior officers. Even according to ICRC there are at least 10,000 MIAs from Iran still unaccounted for.

It is also disgusting that the so-called "human rights" hypocrites in the west actively condoned these abuses against Iranians or even supported them. It is well known to all that the Iraqis were torturing and murdering senior officers captured to get information from them and turn them into surrogates. Both efforts failed and the dignity and bravely of Iranian POWS was unwavering. There is not a single case of a senior Iranian officer turning traitor under torture. Some of the pilots suffered so much in captivity that many died soon after repatriation due to various illnesse contracted during this savage captivity.

Iran needs to level Camp Ashraf and pursue this MKO evil cult till the ends of the earth. Rajavi and Mariam must be tried and hanged like Saddam and company.

I agree, instead of looking and digging, use the US method of torturing the MKO into cooperation.

Hang em with the sound of Marzieh.

Marzieh is being mobbed by the memory of these 10000 still missing.