Funeral of IRGC Commanders in Mashhad 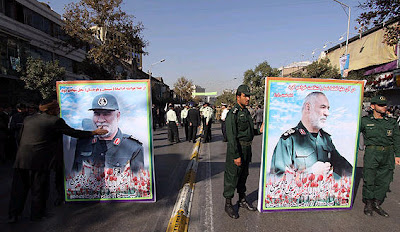 Large portraits of the late Gen. Shoushtari at his funeral in Mashhad. Note the Farsi handwriting identifying him as a Major General. He was a one-star general when he was killed. The second star is awarded posthumously. 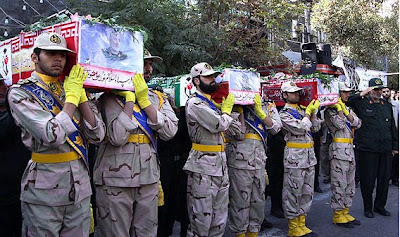 The casket containing the remains of the late Maj. Gen. Shoushtari is the first on the left. Other caskets contain the bodies of the other IRGC commanders killed in a suicide bomb attack in Baluchistan last Sunday. 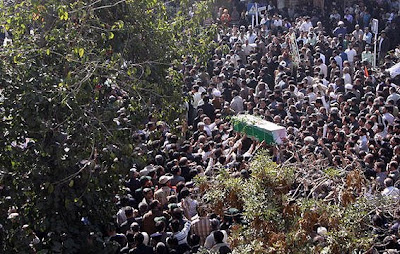 Gen. Shoushtari's coffin being carried by the public.

Interesting that the color guard uses Iranian-equivialnt DCUs. Even the IRGC general at the extreme right does not wear a dress uniform. Unusual use of dress lanyards and shoulder cords worn with DCUs, as well as parade sashes, yellow belts, leggings and gloves.

The pall bearer on the far left is a first lieutenant (Sotvan Yekom).

Nader, I only see two stars on his shoulder boards. It's my understanding that there are three grades of Sepah Lieutenant:

There is sometimes confusion owing to the fact that there is no equivalent US rank for "3rd Lieutenant". Alternate ranking name and order is:

Mark, you are right. He's a second lieutenant in Sepah.

I consider a lot of people who are in those coffins to be perpetrators as well!

And yet, i didn't wish this kind f punishment for them.