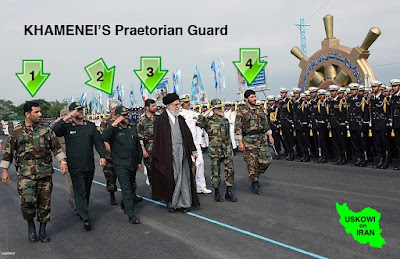 Inspection of the officer cadet graduating class of 2009, at the Imam Khomeini Naval Sciences University in Nowshahr. Note the phalanx of burly-sized, armed security guards protecting supreme leader Ayatollah Khamenei at all times during the ceremony. This may very well be a protective measure now in place since the post-election political dispute. The sidearms carried by the security guards appear to be large calibre service revolvers. Above photo depicts an escorting security detachment of four guards, while the photo below shows a total of six guards, including a plain-clothes team leader. At least seven different guards can be identified between the two photos.
(click to enlarge)

It's interesting to see Iran's top ranking military officials so frequently assemble itself in one public place. The Commander-in-Chief is present, together with all the heads of the respective military branches, including the Defense Minister. They did this in September and now again in October. During times of heightened regional tension, and with it the threat posed by long-range drone attack aircraft, one really must wonder if this is such a wise idea. Perhaps a constant political need for public displays of military solidarity simply outweighs the potential risk.
--MARK PYRUZ
Posted by Mark Pyruz at 3:33 PM

I think one of the major factors you mention is that al the main military leaders are there together, you have Khamenei-supreme leader, Salehi - head of the Artesh, Vahidi - general/minister of defence, Firouzabadi - joint chief of staff, and two others who i can't tell who they are (possibly rear admiral Badlani).

The only other time these people are together in such close proximity is during the main parades, where the same amount of security is visible. The large number of security guards isn't so much out-of-the-ordinary, although i do agree with calling into question the wisdom of having them all assembled together.

Here's a pic from one or two years back, of a military review conducted by the leader:

Possibly four guards in the view. You may be right. Could be the recent photography capturing more of them in view. However have to say, most look younger and more aggressive than previous security teams. Possibly more alert, too.

It is sure lack of knowledge if you call simple body guatds praetorians ?

Preatorians are a in old roman empire very powerful legion responsible for the security of the roman emporer.
they removed or killed one emporer and announced another one.

such powerful are the Khamenie bodyguards sure not.

He is scared to death... like any other dictator