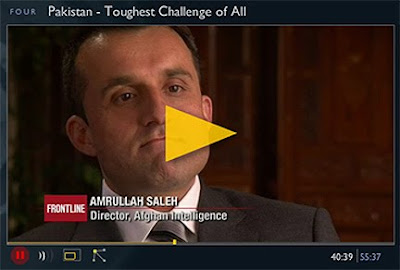 Before continuing on with this post, readers are encouraged to view the latest episode of PBS Frontline, Obama's War.

At about 40:39 into the documentary the Director of Afghan Intelligence, Amrullah Saleh (pictured above), complains bitterly about Pakistani support for the Taliban. He says:

The enemy is an ideology … [and a] policy nurtured in Pakistan for 30 years. And it says Afghanistan must be governed by a backwater, conservative, clerical state obedient, half-obedient or at least loyal to Pakistan. Pakistanis were not able to finance such an adventure, so they started to beg money and resources from Arab countries and from extremist figures in the Arab world.

Iranian Army units massing along the Afghanistan border, 1998
However, cooler heads in Tehran prevailed, and there was no attempted invasion or military occupation. (American and Israeli hawks that subscribe to the notion that Iran's leadership is "irrational" would do well to study the level of restraint exercised during this incident.) While the Iranians faced the same adversaries currently confronting American forces, that is to say Pakistani-supported Pashtun fighters (Taliban) and Saudi-supported Arab mercenaries (al-Qaida), Iran took a different, some would say smarter approach to their conflict. Instead of directly engaging the enemy with its own military force, Iran aligned itself with local proxy forces against the Talibani-Pakistani-Saudi axis. These forces were comprised of Tajiks (an Iranian people), Hazara (Shia) and Uzbeks (Turko-Persians). The game was the same that's now played by the Americans: bring over as many Pashtuns as they could over to their side. Only today, the American variation involves adversarial elements drawn from its own supposed allies- Pakistan, and to a lesser extent Saudi Arabia- as well as a complicated, full-fledged military occupation by IASF forces. Big difference, with far-reaching consequences.

It is a supreme irony that Iran finds two of its enemies (the Taliban and the US) engaged in a seemingly endless war in Afghanistan; another irony being the Baath-US conflict in Iraq. In both cases, the Saudi-supported Arab mercenary group (al-Qaida) is also engaged. All the while, Iran's sideline approach to the conflict mirrors the very one the US once enjoyed during the Iran-Iraq War. It is safe to assume that Iran's leadership is very much pleased with the situation. For if not for an open-ended American military commitment to Afghanistan, Iran might again be forced to deal with this themselves. And for Iran during the late 1990's, that constituted a major distraction, filled with peril and difficulty, to which Americans now understand full well. Ever more so, for the US actually has boots on the ground, with more on the way; in its ninth year of war and counting.

Thanks very much, Paul.

You know this all could have ended much differently if the US had only put aside its own arrogance, and instead of mindlessly branding Iran as part of an axis of evil, had accepted its gracious offer of participation in fully resolving the Afghanistan conflict.

Instead, the US finds itself in a real predicament. It may very well be a repeat of 1965, all over again. We'll just have to see.

good thing that Obama got a preemptive prize at the Noble venue. This means that he can not start a war!

It seems to me that in the invasion of Afghanistan and the first few years after that the US and its allies attempted to do just that, deploying minimal forces in Afghanistan and relying on local forces to overthrow the Talebin and thereafter ensure security in most of the country.

Unfortunately, the weakness of the Afghanistan Govt forces along with Taliban sanctuaries in Pakistan allowed the Talebin to regroup . I don't see how relying wholly on Afghan forces would have made this any better. Please correct me if I've misunderstood anything here.

Damn those typos - past my bedtime!

You are saying that ayatollah Khamenei held Pakistan partly responsible for the killing of Iranian diplomats in Afghanistan comparing it to US situation. However Taliban did not attacked Iran on its own territory (say, suicide bombed Tehran or Qom). It would be better to compare the killing of Iranian embassy personnel in Afghanistan to bombing of American embassies in Tanzania and Kenya in same year which killed 224 people. At that time US did not attack Taliban nor it attacked Afghanistan who harbored Osama bin Laden..
As for attacking Afghanistan or Pakistan. Pakistan would have objected to Iranian attack on Afghanistan. At that time Pakistan was testing medium range missiles, detonated nuclear devices and has been declared first Muslim country possessing nuclear devices. Therefore it would be quite detrimental to Iranian image in Muslim world if Iran attacked Afghanistan and in such way started clashes with Pakistan. Also - Pakistan (dr. Khan) helped Iran with Iran nuclear quest and Pakistan had good relations with China. . And the situation inside Iran at that time was .....tricky.

And I think that it is rather Iran who is US enemy than the other way round, contrary to what Iranian government claims. Because if US is Iranian enemy, US would be banning Iranian websites and Iranian books, and all stuff Iranian. But it is the other way round, isn't it?