There was cause for Iranian optimism over its meeting with the P5+1 group in Geneva, Switzerland:

Iran's Request for Medium-Enriched Uranium Granted
Iran recently requested the IAEA provide it with enriched uranium to 19.75% for the Tehran research-medical reactor, which was furnished by the United States in 1968. The fuel for the reactor was provided by Argentina in 1993 and Iran said the fuel will run out by December 2010. (President Ahmadinejad informally solicited the US with this request during his visit to New York last week).

Today, in a surprise move the IAEA and P5+1 group proposed Iran's request be granted, by means of Iran providing domestically produced low-enriched uranium for further enrichment in Russia, to be turned into fuel rods in France. The meeting's delegates agreed in principle to this arrangement.

Significantly, this agreed upon arrangement implies Western acceptance of Iran's right to enrich uranium, representing a potential breakthrough for its long-held nuclear position. 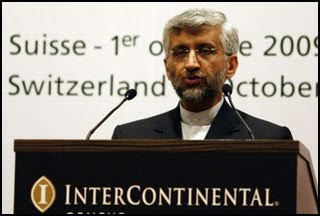 "All nations should have the right to peaceful nuclear technology."

"No one should have nuclear weapons."

"We had broad talks [with the P5+1 group]. This meeting created a good opportunity for fresh cooperation to remove international concerns."

"We believe that the capacity and power of today's Islamic Republic of Iran, in both regional terms and on the international stage, affords an opportunity for countries with a desire to work with us."

"Worldwide and regional security is only possible through cooperation."

More Good News: Iranian Foreign Minister in Washington
The US state department responded favourably to visa requests for the Iranian foreign minister, Manouchehr Mottaki, and his wife to visit the Iranian interests section at the Pakistani embassy in Washington. Mr Mottaki did not meet US officials, but it was believed to be the first such authorization since the 1979 revolution. Earlier, at the United Nations, Mottaki suggested the ongoing Geneva talks could be expanded to the "summit" level. He said Iran was willing to discuss a variety of security, economic and political issues.

A Boost to President Ahmadinejad's Government
An Iranian medium-enriched uranium deal, Mottaki in Washington, additional talks agreed upon- these developments would have been unimaginable during the Bush/Cheney administration. Despite the preceding political grandstanding by the West over the Qom nuclear site disclosure, it appears the US provided Iran with a semblance of respect during the Geneva meeting- something Iran has been seeking for quite some time now. This represents the first political success of President Ahmadinejad's second term, and is being depicted in Iran as a vindication that his tough stance has turned the nation into a world player.