Meeting of Iran-US Delegations in Geneva

Today, William Burns, head of the US delegation and the State Department’s second highest official, held a direct talk with his Iranian counterpart, Saeed Jalili, on the sidelines of the nuclear talks in Geneva. The meeting was the highest-level contact since the two countries broke off diplomatic relations 30 years ago.

Talks on Iran’s nuclear program had begun earlier in the day in the Geneva countryside. The West wants Iran to suspend its uranium enrichment program and open up the country’s nuclear installations to rigorous inspections.

The Geneva talks were always considered to be just the beginning of long and hard negotiations with Iran over its nuclear program. But the new disclosures of a hidden Iranian enrichment facility in a mountainous area near Qum have created a sense of urgency among the Western negotiators to conclude the proceedings by year’s end.

IAEA chief, Mohammed ElBaradei, in the first official assessment of the Qum facility, declared that Tehran was “on the wrong side of the law,” for failing to declare the new enrichment plant.

Many Western diplomats believe that the Qum facility is only one of a serious of hidden installations that Iran has constructed alongside its public ones for what they consider to be a military program. Iran insists on the peaceful nature of its nuclear activities.

Photos below are the first published satellite images of the Qum facility taken by GeoEye on Saturday. The main entrance to the facility is seen at the lower left of the photos. 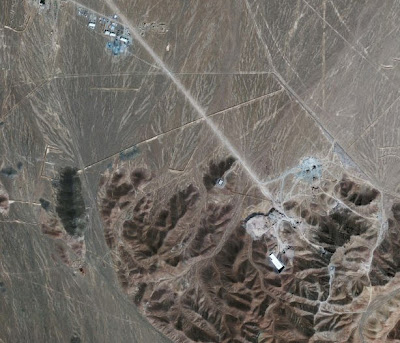 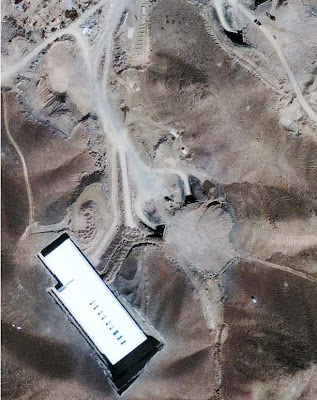