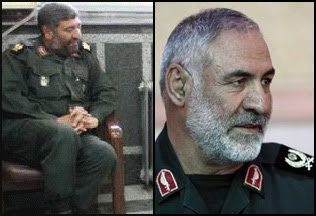 Left: "Under" General Rajab Ali Mohammad-Zadeh
Right: Brigadier General Noor Ali Shushtari
The commanders were apparently inside a car on their way to a unity gathering of Shia and Sunni tribal leaders, in the Pishin region (near Iran's border with Pakistan), when an explosive laden attacker approached the convoy and blew himself up.
PressTV reported there were actually two simultaneous explosions: one at the meeting and another targeting an additional convoy of IRGC guardsmen on their way to the gathering.
RajaNews reported that “an approximately 21 year old male was the suicide bomber and was standing at the entrance to the phys-ed center where the gathering was to be held.” (Apparently, Shushtari held such meetings every few weeks.) It also reported that “the security of the eastern parts of the country has recently been handed completely handed over to IRGC".
Iran's parliamentary speaker, Ali Larijani, condemned the assassination of the IRGC commanders, saying the bombing was aimed at disrupting security in southeastern Iran.

"We express our condolences for their martyrdom. ... The intention of the terrorists was definitely to disrupt security in Sistan-Baluchistan Province," Larijani told an open session of the parliament broadcast live on Iranian state radio.

There were no immediate claims of responsibility, but suspicion likely falls on the Sunni militant group Jundallah (جندالل), or Soldiers of God, which has repeatedly carried out terrorist attacks in southeastern Iran against Shia targets.

In May 2009, the group took credit for a suicide bombing at a Shia mosque that killed 25 people in Zahedan, capital of Iran's Sistan-Baluchistan province, which has witnessed some of the worst attacks by Jundallah. Thirteen group members were subsequently convicted in the attack and hanged in July. 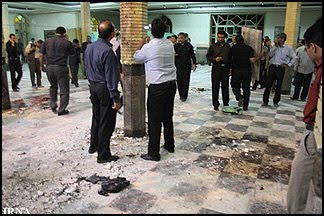 Jundallah has carried out bombings, kidnappings and other attacks against Iranian soldiers and other forces in recent years, including a car bombing in February 2007 that killed 11 IRGC guardsmen near Zahedan, Iran.

Jundallah also claimed responsibility for the December 2006 kidnapping of seven Iranian soldiers in the Zahedan area. It threatened to kill them unless members of the group in Iranian prisons were released. The seven were released a month later, apparently after negotiations through tribal mediators.


Update: Iranian state media is now saying that Jundallah has claimed responsibility for the attack.

The IRGC has also pointed the finger at U.S. involvement. "Surely foreign elements, particularly those linked to the global arrogance, were involved in this attack," an IRGC statement quoted by television said. The term "global arrogance" is Iranian code for the United States.

State TV has also singled out Britain. "Some informed sources said the British government was directly involved in the terrorist attack ... by organising, supplying equipment and employing professional terrorists," it said.

The attack and the subsequent Iranian charges come right before Iranian officials are due to meet on Monday with their Western counterparts, in a sensitive second round of negotiations in Vienna concerning Iran's nuclear program. (Preceding the first round were stormy public charges by the West over Iran's recent disclosure of a nuclear enrichment facility in Qom.) This new situation threatens to severely complicate the already delicate P5+1 talks with Iran. 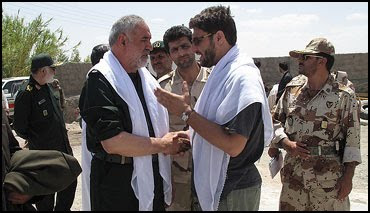 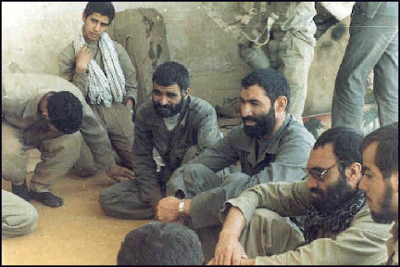 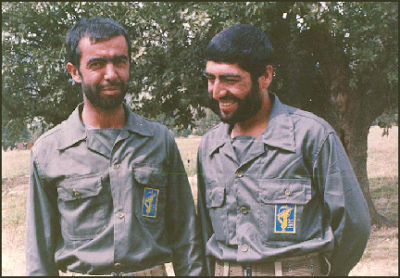 Right: A young Rajab Ali Mohammad-Zadeh
during the Iran-Iraq war
Posted by Mark Pyruz at 5:42 AM

I won't go that far; but I do smell rats.

I would love to know a bit about the "political" affinities of the killed-ones.

I couldn't help but notice that this is less than two weeks after the leadership of IRGC and Basij were shuffled. Were any members of the new leadership killed - or just the old guard?

Schmedlap:
Details are still coming in, but it doesn't appear that these IRGC officers were directly affected by the reshuffle. The reshuffle wasn't so much a "purge" as it was a transfer.

Naj over at the neo-resistance blog is speculating on internal Iranian conspiracy theories. She also has a rundown on past eliminations of high ranking officers of the Iranian military.

Yes, of course. Whenever there is a Baluchi attack there is always finger pointing to US and Britain, the two "enemies" of the Islamic Republic.
But of course IRI does not mention Pakistan because, you know, there are no Baluchis on Pakistan territory, there is no national Baluchi support to brothers living in other countries and of course Baluchi in Pakistan, now, do not have links to Taliban. YAY.

Mark these pictures took me back to memories I had of Sepah. They were far more "visible" in the war years--but turned into more elite behind the scene forces in recent years.

I have been looking at this Shushtari person ... something in his eyes distinguishes him from other rank and file, like Jafari or Naghdi: he doesn't have that typical "anger" ... I am sad because if he has been trying to mend the province y encouraging local-cooperation, then he cannot have been a "bad" guy.

Anyone who works on the platform of uniting shiite and Sunnis in Baluchestan deserves credit. From what I remember of the politics of that region, usually the Sunni and Shiite clerics of the region are working together towards that goal, and they are ALWAYS undermined by extremist minorities of either side, who in practices not unlike the hamas-bombings-when-peace-comes close make sure the instability is maintained.

To anonymous who is pointing out the problem of Pakistan, yes of course! But, guess WHO created the the Pakistani problems?!

Indeed, Ahmadinejad's asked Pakistan to assist in bringing the terrorists to justice

"he doesn't have that typical anger"

That's what I've been thinking all day today. Maybe I am romanticizing someone who died an unjust death, but he just seems to be different than the ones we see everyday.

Seeing him in his war days is especially haunting. These men put up with more shit than any of us could ever, EVER imagine.

This morning, when I first read the news, I immediately thought: "extermination! they did it themselves."

As the day wore on, I'm not so sure anymore - although that is still a likely scenario.

"To anonymous who is pointing out the problem of Pakistan, yes of course! But, guess WHO created the the Pakistani problems?!"

It was their decision to help Taliban, to build more madrasas and to get help from KSA. Their own government decision, their own military decision and ISI decision. No-one elses.