The satellite, which is the country's first such imaging device, was launched by the Safir-e-Rassad satellite carrier on Wednesday thanks to Iranian aerospace scientists and experts' endeavor, IRNA reported.

Despite its 15.3-kilogram weight, which puts it under the category of the micro-satellites, Rassad has all features of a big satellite.

It has undergone all the stages required for its designing, manufacturing, assembly, test and preparation for launch inside the country.

It will orbit the earth at an altitude of 260 kilometers 15 times every 24 hours.

Its mission is to take images of the earth's surface and relay them to the earth-based stations together with telemetric information.

The satellite is equipped with solar panels and uses solar energy to work.

Iran launched its first domestically-produced satellite Omid (Hope) in 2009, which made it the ninth country to develop satellite launch capability.

Tehran also plans to launch the country's first manned mission to space by 2019.

Another impressive feat made all the more so as the Islamic Republic of Iran is under multiple sets of economic and technological sanctions.
Additional specifications: Most main subsystems of a larger satellite are featured on the Rasad , such as a power management system, solar pannels, attitude control, optical equipments, GPS, data and onboard commands management, onboard transmitter and receiver, ranging transmitter and temprature systems. Claimed maximum imaging resolution is 150m.
Iranian TV reports the next launch to be the Fajr satellite in autumn, with 100m resolution and 50 kg weight, and orbit maneuvering capability; followed by the Navid-e-Elmo-Sanat satellite this coming winter. Also, the Kavoshgar-5 rocket lifting a 285 kg capsule will be launched to 120 km altitude this summer, with a recycling cargo weight of 250 kg. (h/t M-ATF @ IMF) 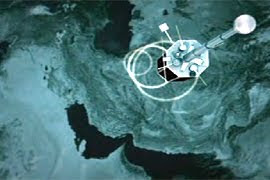 Anyone there knows whether this was a night or day time launch? Very confusing, Press TV video is day time yet Iranian official agency still pictures depict a nigh time delivery!

but just give em the benefit of the doubt .. would u please ??

we have given it to you what the holocaust is concerned.. now please remove your ... from our ....

Are we able to put our new mini nukes on it? How far would it then be able to reach? Allah Akkbar

Reader:
Those pictures could be from the launch of the first satelite (Omid) That was a night launch.

Anonymous 7:28 Am
If launched from Tehran, hopefully they will reach Qom and "Hoze Feyziye" !

the anon 7:28 has an IP from Tel Aviv and is actually playing out the cliche to provoke.. just ignore and don't go for it ;)