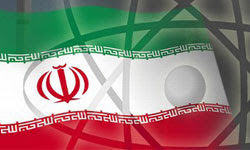 The Director of Atomic Energy Organization of Iran (AEOI) Fereidoun Abbasi told the country semi-official Fars News Agency on Wednesday that Iran is transferring its uranium enrichment activities from Natanz to Fardu and intends to triple the production of 20 percent enriched uranium. The West reacted with concern and the White House called on Iran to rethink its strategy. Western diplomats and officials were quoted by news agencies today that Iran would not require that volume of 20-percent enriched uranium for civilian use at its Tehran research reactor. The Iranian announcement came after the IAEA chief on Tuesday expressed concerns over intelligence reports received by his agency that indicated possible work by Iran on components of a nuclear weapon as late as last year. On Wednesday, the Iranian President Mahmoud Ahmadinejad denied the existence of a nuclear weapon program.

The IAEA always claim to receive "intelligence" reports yet they never prove it with any shred of evidence. It's always speculative. Obviously, Amano doesn't mind the massive nuclear meltdown in his own country and ow the IAEA can deal with it. Stooges are just pathetic.

Iran will be wise to ignore them and move on with their nuclear program. Be it peaceful or military, it doesn't matter. Until the IAEA inspects the nuclear facilities of the US, France, Britain, Israel, Pakistan, India, China, Russia etc. they have no right to dictate terms to Iran on how to run their nuclear program.

A logical response to an illogical, absurd and unjust policy toward Iranian people

I do fully agree with both anoms 9.51 a.m. and 2.31 p.m. respectively. Iran, like every other nation has the ultimate right of possessing peaceful nuclear energy installations for producing electricity power. Is this the so-called and well-known U.S., U.N., Zionist Regime, West and Allies - made Ideas and concepts of D E M O C R A C Y? What a double-standard !

Can someone please explain:

1. Am I correct that 20% enriched uranium is only for medical purposes and cannot, as such, be used for military explosions (except dirty bombs that just spread the radioactive junk around)?
2. How hard is it to take 20% uranium and convert it to bomb-grade in comparison to taking electricity-grade uranium and converting it to medical grade? In other words, does stockpiling a lot of 20% U make sense for ultimate military purposes and constitute a major step toward building atomic bombs or is it more of a PR game?

To get weapon-grade U, Iran needs enriched variety of at least 90%. It is of course faster to enrich to 90% if you start from the 20% base. And quantity matters, because you need to have enough enriched U for multiple weapons to have a credible weapon program. On the other hand, you won’t need all that volume of 20% to run Tehran’s research reactor for medical purposes. So if we take Iran’s repeated declarations at their face value that its nuclear program does not have any military dimensions, then one should ask them why are they tripling the volume of their inventory of 20% U if their intention is only running the research facility in Tehran.

And now Iran has dedicated all of its 20% enrichment activities to a facility built in a mountain, probably able to withstand nuclear strikes.

In other words, Iran is a nuclear power and there is not a damn thing the west can do about it.